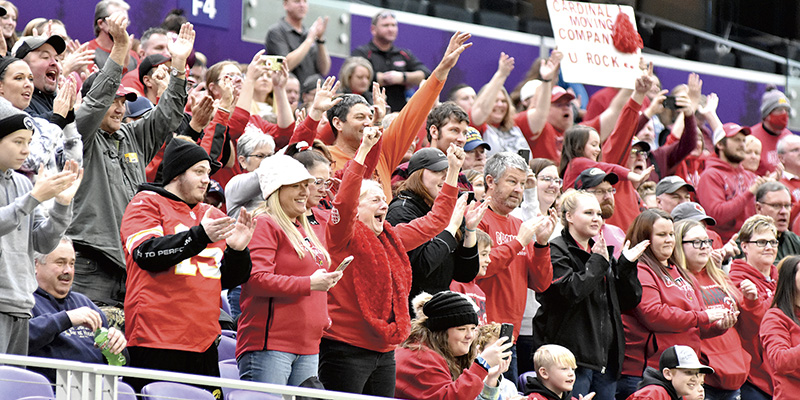 Cardinals garner support from their community

LEROY — When Dave Farlinger moved from Denver, Colorado, back to his hometown of LeRoy 18 years ago, it was to regain a sense of community.

Now Farlinger is finding out exactly what community means as his hometown is buzzing with Cardinal pride. Farlinger, who graduated from LeRoy-Ostrander in 1992, has been the voice of the Cardinals on the public address system for home games for the past four years as well as a youth coach for many of the current Cardinals, who are playing for a Class Nine Man state title against Fertile-Beltrami in the Prep Bowl at 10 a.m. Saturday, at U.S. Bank Stadium.

“You could always tell there was something special with these kids in the way that they worked and the way they feel about the team. They’ve got some really good leaders,” Farlinger said. “These kids never give up. It always seems like there is an adversity or a hurdle in the way. With their drive and their ‘go get em’ attitude, they’ve been able to get over that  hurdle.”

Farlinger has seen many of L-O’s alumni in the stands at the games in the Twin Cities and he’s also seen Cardinal fever running rampant in LeRoy as well.

“The town has been feeding off of this. They’ve been supporting the kids,” he said. “I can’t say enough about the coaching staff and the way that they’ve kept these kids together. They’ve focused on family and they care so much about the kids. They really instill family values and they bring the kids and parents together.”

Neal Bucknell was the quarterback for the Cardinal team that went to state in 2004, which was the last time L-O went to state. Bucknell now works at a bank in LeRoy and he’s been getting some flashbacks of his days on the football field.

“It gets brought up with basically everyone that comes in. Pretty much anywhere you go, there are flags, signs. When you’re in LeRoy, not a lot of stuff happens. This is definitely the main topic of conversation,” Bucknell said. “When you can rally around one positive thing like this, it doesn’t really matter what your views on other things are. It has brought a lot of camaraderie back to the town.”

Bucknell said that playing in the state tournament was one of the best state experiences of his life when he was younger, and now he’s hoping the Cardinals can cash in and bring home that elusive first state title in school history.

Lu Overocker has owned Sweet’s Hotel in LeRoy for 16 years and she’s been a big supporter of Cardinal football the entire time. She has seen the coaches come in and watched them order the same meals every time — especially during winning streaks — and she’s also seen the players come in and get their breakfast’s paid for by local community members.

On Friday morning, breakfast was on Overocker as she wanted to pay it back to the Cardinal team that has brought so much positivity to town.

“LeRoy is a wonderful place. It’s a small town that supports everything and everybody,” Overocker said. “If something happens in town, we all seem to come together and get everybody through, whether it’s good times or bad times.”

The entire community has its hopes riding on Saturday’s game, but no matter the outcome, this has been a fall that will go down in history.