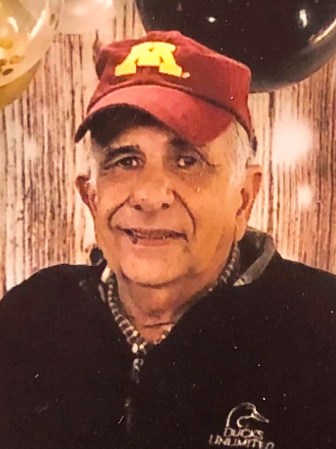 William “Bill” was born on March 4, 1946 in Austin, Minnesota to Arnold and Vivian (Krebsbach) Hall. Bill graduated from Austin High School and was a member of Queen of Angels Catholic Church. After graduating, Bill went on to work for the railroad for several years. Bill also worked as a dispatcher for Rochester Sand and Gravel (now known as Mathy Construction)

Bill lived life to the fullest measure. He had many interests and hobbies throughout his lifetime. Bill loved anything to do with nature, from bird watching and hunting to exploring with grandkids. He loved fishing, boating, camping, traveling, and playing bingo. He especially loved spending time with his grandchildren and supported them in all of their activities. If there is one thing to be said about Bill, it is that he touched the lives of many. There are countless stories that can be told from family, friends, and others about Bill. These stories usually tell the tale of a man who brought joy to those around him. He was generous, kind, and free-spirited. Bill would often tell his family and friends that he was “living like a king.” He found happiness in the simple things in life and taught others to do the same.

Bill is survived by his children, Kelly (Terry Patterson), and Patrick (Stephanie Howe); grandchildren, Brendan (Kaitlyn), Joshua (Emily), Garrett (Brooke), Danielle (Aaron), Emily (Cody) and Coltan, and several great-grandchildren. Bill is also survived by his siblings, Terry Hall, Jeannie Kolpek, Kathy Dahlback, and Susan Herr. Other survivors include many nieces, nephews, cousins, and friends. He was preceded in death by his parents, Arnold and Vivian Hall.

Per Bill’s wishes, there will be a private family celebration of life at Lake Pepin, one of his favorite places. Arrangements are being made by Clasen-Jordan Mortuary.