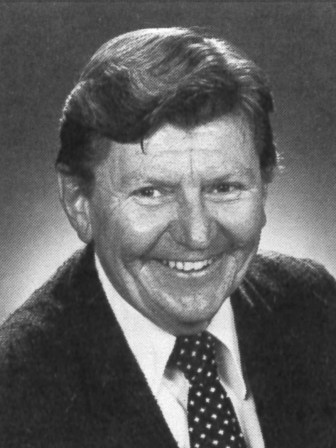 Thomas James Purcell was born on May 14, 1926 to Anna and Raymond Purcell in Auburn, Washington, and grew up in St. Paul. He got his first job at 12, as a busboy – 19¢ an hour – in the Carling’s Cafeteria in downtown St. Paul. He had never been to a restaurant before in his life.

Active participation in sports started early, with midget league baseball. His team’s sponsor was a funeral home and the youngsters got rides to out-of-town games in a hearse.

Tom left for World War II at 17, needing his parents’ signatures to enlist. His active duty in the 9th Air Force entailed interdiction sorties from Reims, France to Germany on a A-26 Invader.

Upon discharge and return to St. Paul, he enrolled in Hamline University, where he pledged Theta Chi Fraternity. In addition to action on the football and track teams, Purcell was a forward on the 1948 Hamline hockey team, which overcame great odds – poor equipment and ragtag uniforms borrowed from the football team – to win the conference championship, a first for the University. Purcell was later inducted into the Hamline Athletic Hall of Fame.

After graduation, he was hired by Hamline as their Director of Public Relations.

Innings, pucks, sets, and putts punctuated his life: Purcell played baseball on the Excelsior city team, hockey on the Austin city team, as well as tennis and golf.

As a downhill ski instructor, he met Patricia Ochs in 1950, and took her anywhere there was a ski hill in the Twin Cities. In 1952 he took her to the altar. They were married at St. Raphael Catholic Church, in Springfield, Minnesota. The newlyweds relocated to Austin, where Tom had been hired by the Hormel Company. He retired as Director of Marketing and Advertising in 1989.

Purcell served on the Austin City Planning Commission, and in 1992 was elected to serve as the city’s Councilmember at Large.

His three terms on the City Council were highlighted by urban renewal projects in Austin that included blight removal, construction of a new public library, the Town Center building, two large downtown apartment complexes, residential housing and the walking/biking paths along the Mill Pond.

He taught business in a Riverland Community College evening class.

Theater held a special interest for him and he acted, danced and sang in 26 Summerset plays and musicals.

He served as a Eucharistic minister to men and women incarcerated at the Mower County Jail, and was a devoted member of the Carmelite Confraternity at the Annunciation Hermitage.

He was a true advocate of the hospice program, calling it “the living, visible proof of God’s mercy.” He was a hospice volunteer for 17 years with the Mayo Clinic Health System’s Austin Hospice.

His participation on the 2011 Honor Flight to Washington D.C. was very meaningful to him. And now he’s flying home for his final victory.

He is reunited with his parents and brother, Jack. He will live on in the hearts of Patricia, his loving wife of 69 years; his children, Pat, Tim, Mary, Peggy, Ann; and his grandchildren, Katie, Mary, and Theresa (Marc).

Memorials in Tom’s memory may be given to the Mayo Clinic Health System’s Austin Hospice, or to St. Augustine Catholic Church in Austin. Clasen-Jordan Mortuary is handling arrangements.