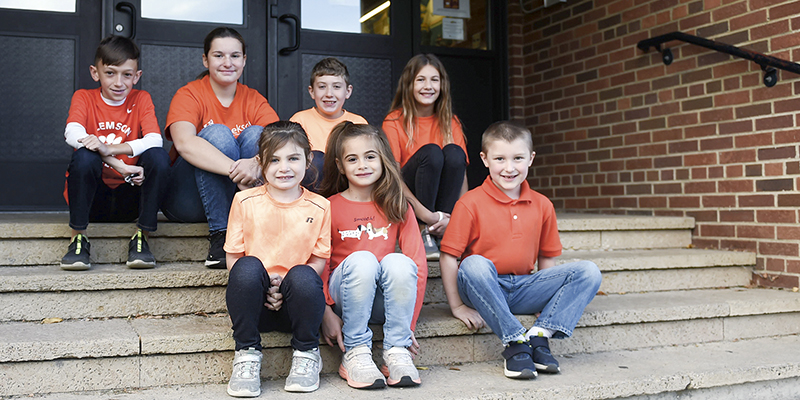 This Wednesday is Unity Day, a national initiative that preaches inclusion, understanding and kindness to combat bullying.

It’s something Pacelli Catholic Schools are taking to heart as students roamed its halls the day before in a walking progression of orange — the color used to designate the day.

While the actual Unity Day is Wednesday, Oct. 20, Pacelli chose Tuesday to observe the message.

It’s a chance for the school to double the strength of the message at the same time as the school has paired it with the Friendzy curriculum. In Pacelli’s case, it’s the church-centric arm of Friendzy they are following.

“It’s the theme that we need each other,” said Assistant Principal Angela McQuinn. “Build each other up rather than tear each other down.”

Friendzy focuses on the social-emotional growth of students across a broad spectrum that includes lesson planning for teachers and student surveys, both before and after the studies are completed.

It’s a system that makes sense for Pacelli Catholic Schools, which can pair the curriculum with Bible teachings on kindness and support.

“It all marries together,” McQuinn said. “It’s lifting each other up.”

Pacelli has decided to focus primarily on getting the message to its elementary students, with some instruction set aside for the older students, with the understanding that the way these students — both young and old — carry themselves can reflect on both age groups.

This becomes especially important in that younger and olders students share the same building.

“It’s vital we talk a lot,” McQuinn said. “We all make mistakes and sometimes words are easy, but actions are harder.”

On Tuesday morning, a number of Pacelli Catholic School’s elementary students sat down to discuss how they viewed friendship and bullying, displaying a keen understanding of the two issues.

Elementary student Isaac Johnson has taken the day’s theme to heart every day.

“When I see my friends, I’ll hold the door open and say, ‘how is your day?’” he said. “I think it’s very important and cool to have friends. It’s sad when you don’t have friends.”

Another elementary student, Emmett Harmer, said he understood the danger of bullying and being mean.

“They could get hurt,” he said. “I would tell them to stop fighting them.”

The students also understood the weight of words, as well as understanding ways around them. Autumn Drennan said she would ask simple questions in an effort to stop bullying.

“Why are you being mean to others?” she said. “Is that how you would like to be treated?”

Both Ryder and Avery Hastings were part of Tuesday’s sit-down, and they were able to share the message together. It was Avery who said that her older brother’s example is what she tries to follow.

It’s an easy message to follow because Ryder understands his sister and maybe those younger than him look up to older students.

“I try to set an example of how younger kids follow in the footsteps of the older kids,” Ryder said, pointing out how influential the older students can be.

It was Jacey Bednar that really summed up the morning, relating that everything starts with the individual.

“Always believe in yourself and not give up,” she said.