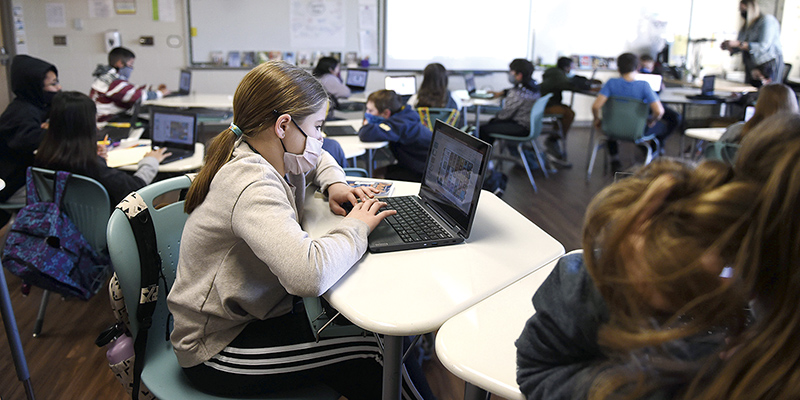 IJ Holton Intermediate student Sawyer Loucks works on her laptop during class at the Pi Academy at the school. Eric Johnson/photodesk@austindailyherald.com

APS opens second Pi Academy with eyes to the future

When the Pi Academy was established in 2014, at Southgate Elementary, it was done with a specific target of reaching students who excelling past their current grade.

But that target only included elementary students in the district leaving questions in the minds of parents, like what comes next?

This year, the district has begun to answer that question by establishing a second Pi Academy at IJ Holton Intermediate School.

“We felt like we really had a program that was successful. Parents were feeling very good about it,” said Edwina Harder, coordinator of GT Services. “We had things really working well at Southgate, but then parents of Pi students were saying, ‘but what happens when we’re done here?’” We had been investigating as a district. Is there some sort of iteration that we could use at the next level?”

The new Pi Academy is an extension of a need officials realized early on when establishing Southgate’s Pi Academy. While there were special services in place for higher-end education for excelling students, there were some that were simply too far ahead in their development.

“There are some students that are so advanced that it’s almost that they know their grade level standards before they enter that grade,” Harder said.

As the need became greater, APS began looking outward for models to follow. They went and observed similar programs based mostly in the metropolitan areas of the Twin Cities to see how those districts approached the issue.

Part of that question APS officials were looking to answer was how to form a sustainable model that would carry on, with possibilities for growth in the future.

Southgate’s program started small with just one teacher and one classroom, but eventually it expanded to two teachers, indicating more room for growth as more students came into the program.

“Parents really took a leap of faith with us as we opened it,” Harder said.

But the Pi program overall has been a model of adjustment.

Pi is also an evolutionary example of education over time, where districts recognize the need to find different modes of education for different students.

Administration also recognized the success of Southgate and built Holton’s off that success. They decided on a system of two teachers, but the Holton academy had to adapt for the school’s elective and exploratory classes as well.

It was a social component that the administration didn’t want to risk losing.

“How much time will they be together, because at Pi Southgate most of their day they are together as a cohort,” Harder said. “What we’re hearing from parents is as kids are getting older, we also want them to meet these other kids. They’re interested in sports, they are interested in activities and clubs.”

At the Holton Pi Academy, the students are with their teachers for core classes including reading, math, social studies, science. But the students are also getting the opportunity for things like band, orchestra and music.

Pi students are guided through social interactions as part of the Pi Academy experience, pairing students with counselors at the school. Eric Johnson/photodesk@austindailyherald.com

Entry to Pi and the future

It’s important to know that Pi is not a class that students get directed to. It’s an elective alternative for students in the top 2 or 3% that sees students invited to the opportunity.

Harder spends a lot of time combing through test scores each year to find those students that excel and are pushing the standards of their class. A second-grader reading at a third or fourth grade level for example.

That being said, a student has to achieve at a high level across the board.

“We know there are kids out there that are reading and they are great readers even when they enter kindergarten,” Harder said. “That doesn’t necessarily equate to being invited to Pi because you have to be equally high in your math and the Cognitive Abilities Test (CogAT).”

CogAT is one of three tests that students take that helps Harder in determining possible new students. This November, Austin students are slated to take the CogAT again and when completed, she will pour through the data of each student.

Even if a student doesn’t make the Pi Academy standards, it doesn’t mean there isn’t opportunity for higher education.

“They are just peaking in one area,” Harder said. “Those kids still get advanced services in the building, but it looks different.”

This is the first year of Pi Academy at Holton and already there is eye to the future to see what possible next steps there are.

“We are continuing to look at pathways for these highest achievers when they leave Holton,” Harder said. “I’m currently in conversation with (Ellis Middle School Principal) Jess Cabeen. There are definitely more parameters that come into play as kids have more electives.”

But the bonus of Pi is the critical thinking opportunity that comes with the studies employed by the program, which will become more important as they progress through school.

In a way, students are allowed to chart their own course.

“We give them more depth with work and questions,” said Melissa Korfhage, one of the teachers in the Holton Pi Academy. “We encourage them to ask why. We let them take the lead on what they want to do and learn.”

In that way, that critical thinking the students employ actually helps in self-governance when it comes to instruction.

“They challenge themselves,” said Pi’s other teacher, Hannah Blumenshein. “They are sharing their interests with other people.”

Slice of that Pi

As critically successful as Pi Academy has been, there is a continued emphasis to ensure that social growth and social needs are met.

At the Southgate Pi Academy, first through fourth grade students came from all over the district to that one classroom, and largely stay within that circle. But the district realized that students needed more of that social interaction.

It’s why it became important to ensure that students had other outlets during their day to make sure they were with other students.

“We continue to have rigorous class options so they can continue to indulge,” Harder said. “Maybe they are going to be an artist and they really want to pack their schedule with as many art electives as possible. But let’s make sure we can offer rigorous math, rigorous language arts.”

Pi has also involved the school counselors to guide the students in everyday interactions. How to deal with that social-emotional side. Simply put: How to have a conversation.

“That’s something we work on every single day,” Blumenshein said. “What’s an appropriate way to have a discussion? We’re having structural discussions.”

All of this together has created a positive atmosphere around the program, with more and more parents inquiring about it, and as that interest grows the social interaction part of the equation becomes more important.

This is done while answering the questions of the workload each student has, something Harder feels is important to answer up front.

“One question that sometimes comes up is, does that mean they have to do all of what a typical fifth-grader would do and more?” Harder said. “Really, no. We again persist to make sure kids have met their standards at the grade level. I would want to put that out there that sometimes people think  it’s just more. No … it’s different.”

Overall, though, Pi Academy at Holton, like at Southgate, has one overall goal and that’s to create just one more opportunity for success. To follow a progression that seeks to meet students where they are at rather than an overarching mode of education that is the same for everybody.

“We’re setting them up for what to expect to successfully learn,” Korfhage said. “They have the tools.”