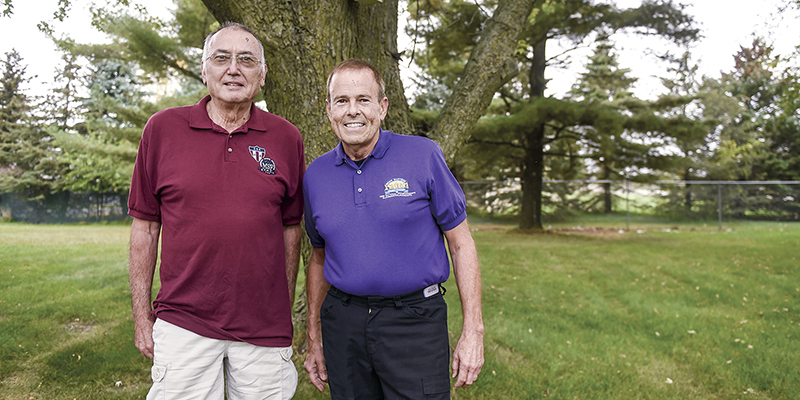 Gary Letendre, left, and Jeb Blais will be inducted into the Minnesota Sports Federation Hall of Fame for umping men’s softball later this month. Eric Johnson/photodesk@austindailyherald.com

Gary Letendre and Jeb Blais umpired softball games together for over four decades, and now they’ll be headed to the Hall of Fame.

The pair of Austin umps, who each retired in 2020, will be inducted into the Minnesota Sports Federation Hall of Fame for umping men’s softball at a banquet in Albert Lea on Oct. 30.

“We were attached at the hip until 2019. We did almost every (men’s fastpitch) game that was thrown at us, from Mankato, to Rochester to Bloomington,” Letendre said. “We went to Minot together for a national tournament. We’ve done many, many games together and it’s been a great run. We’ve had a great friendship.”

Letendre said that Don Stillwell and the late Dave Tollfeson were two of his biggest role models as officials when he came to town. They taught him the basics of calling a good game.

“You’ve got to know the rules and you’ve got to hustle to make sure you’re always in a good position,” Letendre said.

While they enjoyed their time as officials, Letendre and Blais are sad to see that numbers are declining in officials throughout the state, and high schools are having a tough time finding officials for games. Blais said he had to learn to tune out unruly fans early on.

“They’re hurting for officials and I just can’t believe it,” Blais said. “Don’t listen to the fans. I had some good youth 12 and under umpires coming up, but the parents were getting on them and they gave it up. It’s 12 and under, let them play ball.”

While their time in the diamond has run out, both men have some great memories as they now make the transition to being fans.

“I really liked doing the men’s fastpitch games. There was so much athleticism on display and you got to be there for every pitch and every inning,” Letendre said. “It’s just a wonderful game.”

The MSF holds its hall of fame induction biennially for individuals who have made outstanding contributions to softball, which is the largest adult and youth participant sport in Minnesota and the nation.