Christopher Robert Stewart, 33, of Lansing was sentenced to 360 days in jail, to be served as work release in 90-day increments over the course of four years, for felony criminal vehicular homicide – operate motor vehicle under the influence of any amount of a schedule 1 or 2 controlled substance.

In addition to jail time, Stewart must also serve 10 years of probation. Should Stewart violate the terms of his probation, he will be required to spend 48 months in prison with credit for eight days served.

Charges of felony criminal vehicular homicide – operate vehicle in a negligent manner while under the influence of a controlled substance, felony fifth-degree drug possession, misdemeanor DWI – operate motor vehicle – body contains and amount of schedule I/II drugs – not marijuana, misdemeanor fourth-degree DWI – under the influence of a controlled substance, and misdemeanor driving after revocation were dismissed as part of a plea agreement reached on June 28. 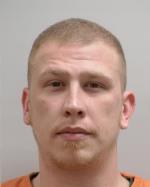 Court documents state that law enforcement was dispatched to the scene of a two-vehicle accident at about 5:17 p.m. on May 9, 2019, at the intersection of County Roads 28 and 29 in Austin Township. Upon arrival, law enforcement observed a 2001 Ford F-350 and a 1998 Dodge Caravan in the west ditch of County Road 29.

The Dodge’s driver, 89-year-old William Richard Regner, was deceased. Stewart was pointed out to law enforcement as the driver of the Ford.

A deputy asked to see Stewart’s driver’s license and the Ford’s owner, who was also present at the scene, said Stewart did not have one. When the deputy asked Stewart what happened, the Ford’s driver spoke for him and said that Regner “blew the stop sign.”

The deputy noticed that Stewart had red sores on his face, was making fast body movements and had dilated pupils that were slow to react to light. Stewart was made to perform five field sobriety tests and failed three. He initially told the deputy he had smoked methamphetamine about a month prior and had more recently used marijuana, but then changed his story and said he had taken an Adderall.

When the deputy said he believed Stewart had used drugs within the previous two days, Stewart nodded in agreement.

The deputy was granted a search warrant for a sample of Stewart’s blood, which was drawn and sent to the Bureau of Criminal Apprehension laboratory for analysis. The results showed the presence of amphetamine, methamphetamine and delta-9-tetrahydrocannabinol.

Law enforcement executed a search warrant on the Ford and found three cartridges containing suspected THC oil, a small amount of marijuana, and Stewart’s cell phone. A search warrant was then conducted on Stewart’s phone, which contained several text messages pertaining to marijuana and THC oil as well as a photograph of THC oil products.

An analysis of one of the three cartridges seized from the Ford reflected 0.569 grams of tetrahydrocannabinol.

A review of Stewart’s criminal record shows prior convictions for theft and multiple traffic violations.

In addition to jail and probation, Stewart must also perform 100 hours of community service and oay $210 in court fines and fees.

— Eric Johnson contributed to this report