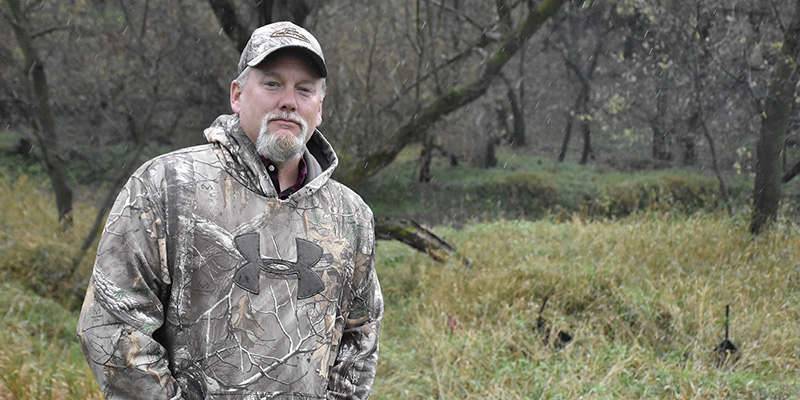 Jamie Braaten of Austin has been hunting for four decades. Rocky Hulne/sports@austindailyherald.com

Minnesotans will be a ware of CWD during this fall season

It is before sunrise on an autumn morning and Banfield fourth grade teacher Jamie Braaten is headed up the hill.

He treads through the darkness while carrying his bow until he reaches his deer stand, where he will spend a good portion of the day reading and hunting. If he gets a shot at a deer, he’s pleased. If not, he spent the day closer to nature.

And that’s not a bad thing by any means.

“You get to watch the morning unfold,” Braaten said. “You hear the first chirp when you’re sitting in the stand and a few seconds later, the birds start calling back to each other and the sky starts getting more light. Then a squirrel starts to scamper and things start to move. That unfolding does not get old. The morning is really special.”

Braaten poses next to a taken deer.
Photo provided

Braaten has been hunting for about four decades, switching from shotgun to bow hunting about 10 years ago. It’s a tradition that he’s enjoyed since he was 11-years-old, and it’s one that he’s also shared with his children, who have started to show renewed interest in hunting as young adults.

“I do have to sell it to my kids. They aren’t necessarily super excited about hunting with their dad,” Braaten said. “My son went off to college and he became interested in it again. I told him, ‘it’s time to come and hunt with your dad again.’”

Minnesota will open its firearm deer hunting season on Nov. 6, and the fields will be filled with hunters, but they’ll also have to be on the lookout for Chronic Waste Disease, which is a prion disease that affects deer, elk, reindeer, sika deer and moose. It has been found in areas of North America, including Canada and the United States.

In Minnesota, a majority of CWD reports have been in southeastern Minnesota.

To track CWD this fall, the Minnesota DNR is requiring hunters to have any deer older than one year tested. There will be testing stations that will be available online and hunters can also cut the head off of their deer and bring it in for testing.

There are also carcass movement restrictions in the 255 and 655 permit areas, which are both near Austin.

“You can’t take a whole carcass out of those areas without quartering the deer,” Barb Keller, Big Game Program Leader for the MDNR said. “If you have the test results back for CWD, you can take the whole carcass out.”

Keller said that CWD rates have maintained a low rate of 1% in Minnesota deer, but the rate is much higher across the river in Wisconsin.

“It’s pretty similar in Minnesota to anywhere else in the country that has CWD,” Keller said. “There is a slow spread and you see the geographic footprint. We’re optimistic that we’ve been able to keep that prevalence rate pretty low. In Wisconsin, they have some areas where over 50 percent of deer test positive.”

Keller said hunters should label their deer when processing the meat, so they don’t end up consuming the meat.

Braaten has been dealing with CWD awareness for the last three or four years and through archery hunting, he’s been able to submit his samples voluntarily.

“You only have to tag your deer if you want to know if your animal had CWD,” Braaten said. “Most of us don’t care. Because it doesn’t affect humans and the meat is safe. If you see a deer and it looks mangy, you’re probably going to let it go anyway.”

The DNR Web Site offers up to date information and test results. It also shows where the positively tested deer were located.