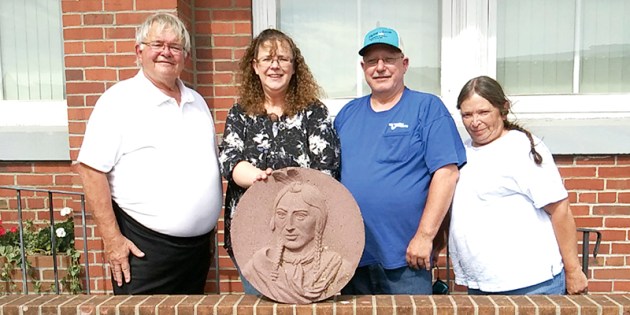 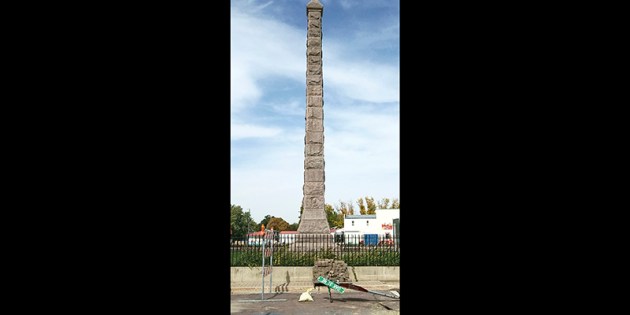 The monument featuring the Chief Sleepy Eye featuring a crest of the namesake. Photo provided 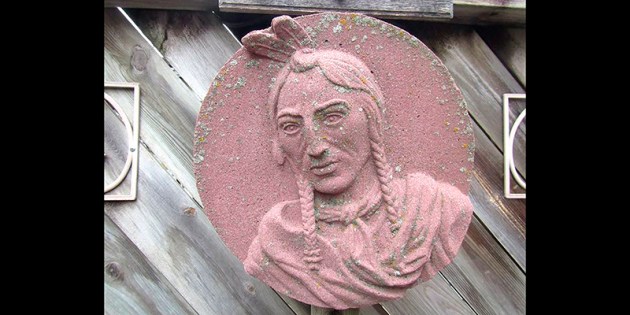 The crest of Chief Sleepy Eye hanging from the Pirmantgen’s deck. Photo provided

An Austin couple has donated a cast of Chief Sleepy Eye, that’s been in the family for years, to the Depot Museum in Sleepy Eye, Minnesota.

Brian and Dorothy Pirmantgen donated the cast that was first in the possession of Brian’s grandfather earlier in the month.

“Where he got it from, nobody knows,” Dorothy said.

The cast was handed down through the years until it came into Brian’s possession, who had the cast hanging from the couple’s porch, which Brian was remodeling.

“Originally, my grandfather had it, then my father got it and had it hanging on the side of their house,” Brian said.

Brian, who is active on the Facebook page “You Know You’re From Austin, Minnesota when …” believes the cast itself is close to 119 years old and could be connected to a monument to Chief Sleepy Eye in Sleepy Eye.

Chief Sleepy Eye, or Ishtakhaba as he was known before, was chief of the Sisseton Dakota Tribe from between 1822 and 1825, through 1860 when he died.

Sleepy Eye is credited with choosing the site for Mankato as a trading post, advising those involved to build on the bluff rather than near the Mississippi River because of flooding.

At first, the Pirmantgens thought it was identical to casts already in the museum, but upon closer inspection, they noticed, along with those from the Museum and Sleepy Eye Mayor Wayne Pelzel, that the casts were slightly different.

But what they did find was that the cast matched a cast on a flagpole at the Sleepy Eye Fire Department.

Brian went on to say that after some digging and checking with others by Sleepy Eye’s Fire Chief Ron Zinniel, the casting on the flagpole most likely came from a pillar at the entrance of a state park that is now known as Allison Park. Extending off that, Brian believes that his cast that he donated may have come from the same place.

Brian intends on digging further into the cast of Chief Sleepy Eye in hopes to find more on the mystery, but for now he is happy it could find a proper home.

“It was a good place to donate it to,” Brian said. “What better place than Sleepy Eye?”