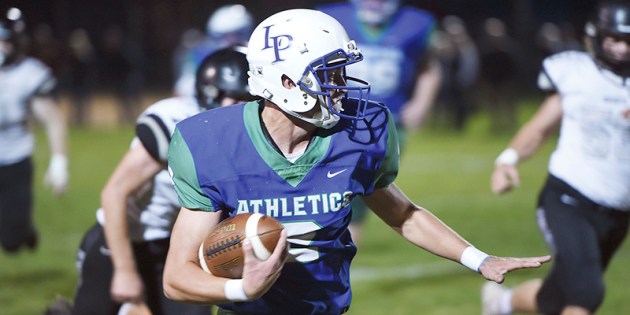 Lyle-Pacelli’s Jake Truckenmiller heads down the sidelines on a run against Kingsland Friday night in Lyle. Eric Johnson/photodesk@austindailyherald.com 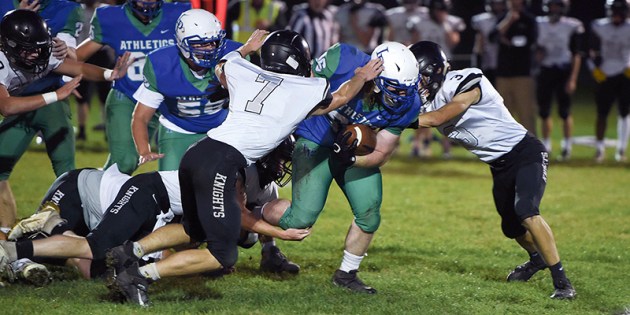 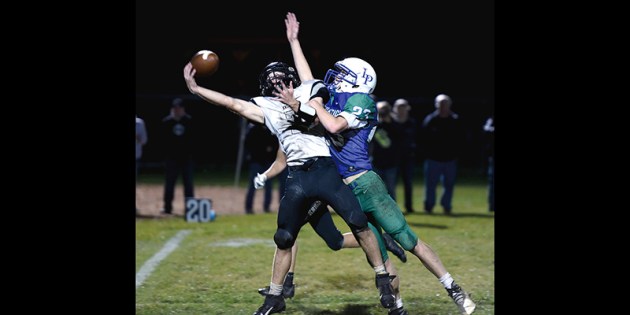 Kingsland’s Kaden Rath comes up with the one-handed interception late in the second quarter Friday night in Lyle. Eric Johnson/photodesk@austindailyherald.com 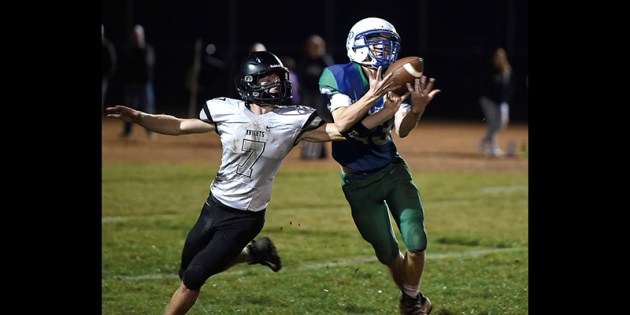 Lyle-Pacelli’s Hunter Bauer tries to come up with the catch while defended by Kingsland’s Kaden Rath Friday night in Lyle. Eric Johnson/photodesk@austindailyherald.com 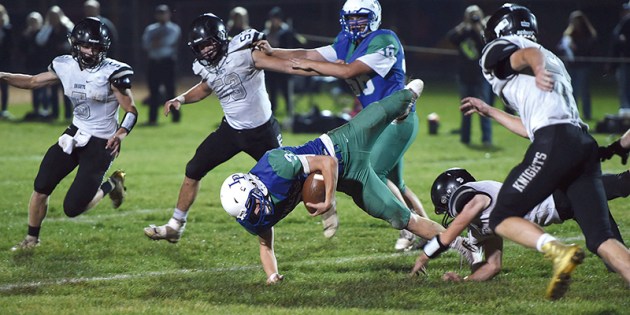 Lyle-Pacelli’s Trey Anderson is upended on a run against Kingsland Friday night in Lyle. Eric Johnson/photodesk@austindailyherald.com

LYLE — The Lyle-Pacelli football team is still looking to change the mood of the program, and the team is trying to stay positive after a 54-6 loss to Kingsland on Homecoming Friday.

The Athletics (0-5 overall), who lost to Houston 12-6 in OT last week, were close on a lot of plays, but in the end it was the big plays that did them in. Kingsland (3-5 overall) had five scoring plays of more than 35 yards.

L-P assistant coach Carl Truckenmiller was filling in as head coach for Brad Walter, who was out with an illness, and Truckenmiller said the team needs to get more physical.

“We have a tradition of losing and we just can’t step through it. Girls basketball used to be like that. We just knew how to lose. It was hard to flip that switch, but when we did, we were winning. We have kids who can do it,” Truckenmiller said. “We started out so good and then one thing happens, and they get a big play. It just snowballed. We can’t get things put together and now we’ve got a tough schedule coming up with Grand Meadow and LeRoy. We’re not physical enough.”

L-P trailed 33-7 after halftime, however, earlier Trey Anderson caught a 37-yard TD pass from Jake Truckenmiller to pull the Athletics within 14-7 near the end of the first quarter. But the Knights tacked on a defensive TD and two scores of over 45 yards, including a 59 yard TD pass from Kale Mensink to James Howard with just 7.1 seconds left in the first half.

L-P junior David Christianson had four sacks, all of them in the first half, while three of them came on the same drive as he tried to lift the Athletics out of a hole.

“I just got really energetic and I really played my heart out,” Christianson said. “It’s a grind. You’ve just got to keep going and it takes a lot. You just have to look it short term and keep moving on. It’s going to be a big task to change the mentality of the program.”