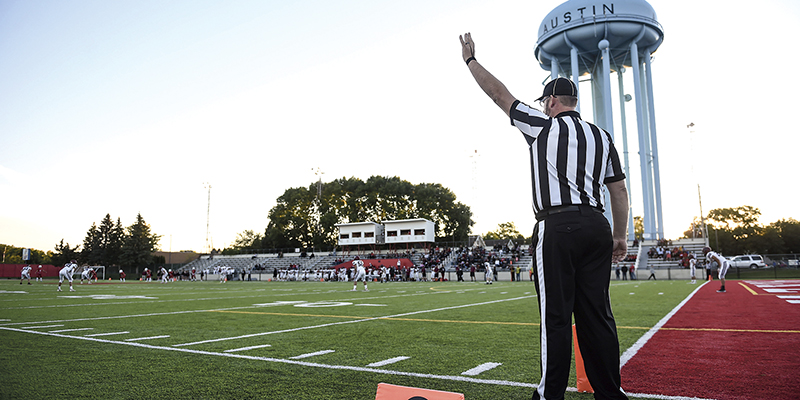 A referee signals prior to the opening kick-off between Austin and New Prague this past Friday. More and more games are being played on Saturdays to account for an extreme shortage in available referees. Eric Johnson/photodesk@austindailyherald.com

You may have noticed some strange things on the local sports scene lately.

Football games are being played on Saturdays and soccer teams have gone up to a week without a competition on the schedule due to a shortage of officials. The situation was so dire during a recent Riverland Community College volleyball match that the school had to pull a couple of student baseball players from the crowd to judge the corners. 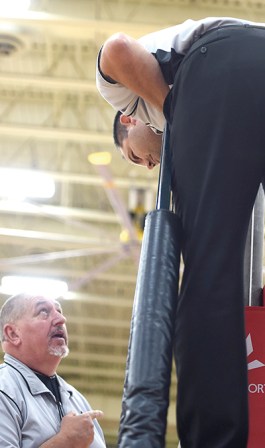 Up referee Kasey Krekling confers on a play during an Austin volleyball match in August. Eric Johnson/photodesk@austindailyherald.com

The bottom line is, it is impossible to have games without referees and the area has certainly grown short on referees — especially in volleyball, soccer and football.

Austin High School Activities Director Lisa Quednow attributed the shortage to the pandemic and a general loss of interest in wanting to grab a whistle and call a game.

“I think it has been moving to fewer officials in the last three years and COVID really caused some of our more veteran officials to retire last year,” Quednow said. “The negative feedback that officials tend to get from fans and some coaches and players have also caused it and lots of younger adults who participated in sports do not find the value in officiating and giving back to the sport they enjoyed in high school and college.”

Kasey Krekling of Hayfield not only coaches baseball and girls basketball for the Vikings, he also serves as a volleyball official. He makes an extra $2,000 to $3,000 every fall that allows him to take trips he normally wouldn’t be able to afford on a teacher’s salary.

He also gets the benefit of being around high school sports.

Krekling said his good experiences are much more common than the bad ones he encounters as an official. He encourages anyone to give it a try and he finds the job rewarding.

As a coach, Krekling is highly appreciative of officials.

“Without officials, games simply can’t happen. It is that easy. There is a crisis right now and we need to find a way to curve the problem, otherwise high school sports may not exist in the near future,” Krekling said. “I think everyone is starting to realize that problem and officials are starting to get treated with more respect everywhere. We need to continue to work to make officials feel respected, pay them a good wage for doing a job that requires a certain skill set, and put new officials in good situations with a mentoring program so they continue to officiate for many years. If sports were an important part of your high school experience, please consider helping out by becoming an official. Every sport is currently facing a shortage of officials, and without new officials the high school sports experience will start to look much different for future generations.”

Quednow implores anyone interested in officiating to give it a shot. Besides varsity positions, there are possibilities to officiate at the JV and even junior high levels.

“Minnesota has a great opportunity for people interested to enter officiating,” Quednow said.

Photos: Another day on the farm