Remembering 9/11: Reminders of the fallen who risked their lives 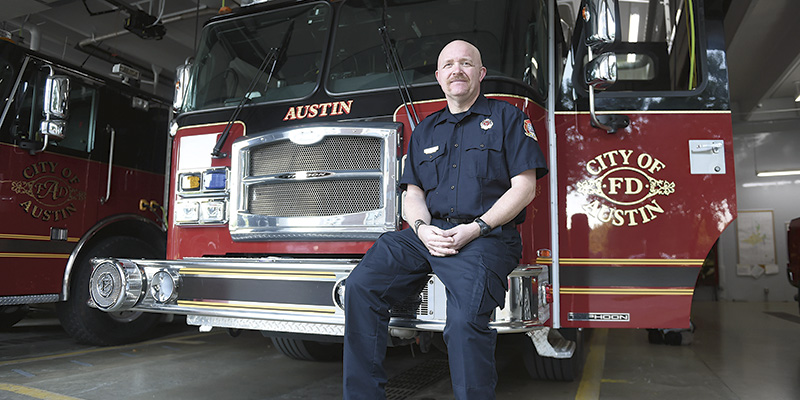 Hans Gilbert was just 19 when 9/11 happened. Like firefighters across the nation, he remembers those who lost their lives trying to rescue others. Eric Johnson/eric.johnson@austindailyherald.com

Every time Hans Gilbert goes to get a drink of water at the Austin Fire Department, he is reminded of the day that changed America forever.

Gilbert, who was a 19-year-old Riverland Community College student when 9/11 took place, can’t help but pay homage every time he looks at the flag above the fountain that contains the names of all 343 who died while trying to save lives during the terrorist attacks on America.

“There have been lasting effects to this day. Just take a moment to remember all of the families that were affected by it. Those were 343 people gone like that, doing the job that they loved,” Gilbert said. “I can’t imagine climbing up those stairs in that situation and dealing with that. I’ve always had a ton of respect for the 343. We need to remember the sacrifice that they put forward. They died doing the job that I love.”

Gilbert has been a firefighter for the AFD for 10 years and seven of those years he has been a full-time employee. He has also been in the military for his entire adult life — serving deployments in Iraq, Kosovo and Afghanistan.

Gilbert’s lasting memory of the post-9/11 world was attending the funeral in the Bronx of a former firefighter, who died while serving in Iraq in 2004. That firefighter was in an iconic 9/11 photo during the raising of a tattered flag after the Twin Towers fell. That photo is on display at the AFD.

While at the funeral, Gilbert met Hilary Clinton, Rudy Giuliani and Mike Bloomberg. He also met plenty of firefighters and fellow servicemen.

Gilbert was on his way to class at Riverland when he found out about 911. He recalled walking into the cafeteria and seeing the second plane hit. It wasn’t long before he was over at the armory hoping to get some payback.

“We all viewed ourselves as under attack and all wanted to do our part,” Gilbert said.

Gilbert now has kids of his own and he’s made a strong effort to keep them educated on 9/11’s place in history.

“I remember asking my mom where she was when JFK was assassinated,” Gilbert said. “Now our kids ask us where we were when 9/11 happened. I think it’s important to remember that day.”