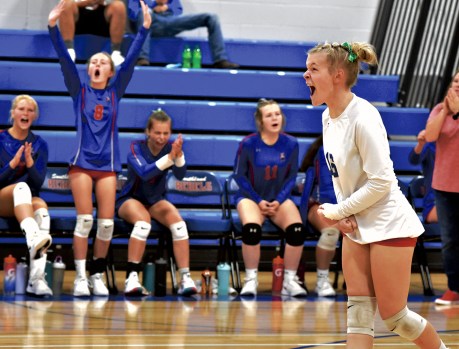 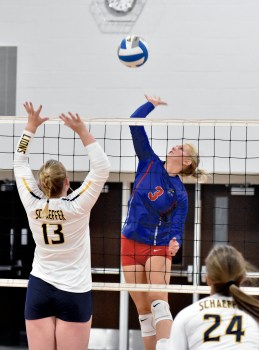 Southland’s Jaselyn Sathre goes up for a hit against Schaeffer Academy in Adams Monday. Rocky Hulne/sports@austindailyherald.com 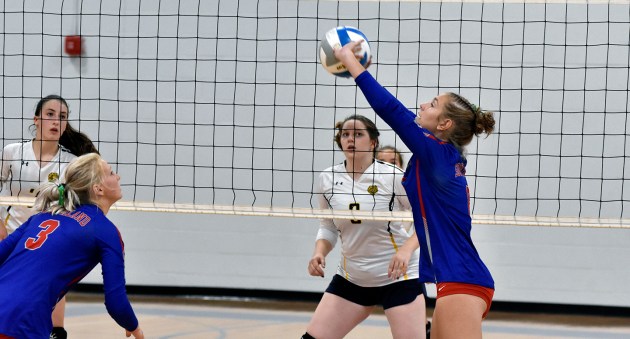 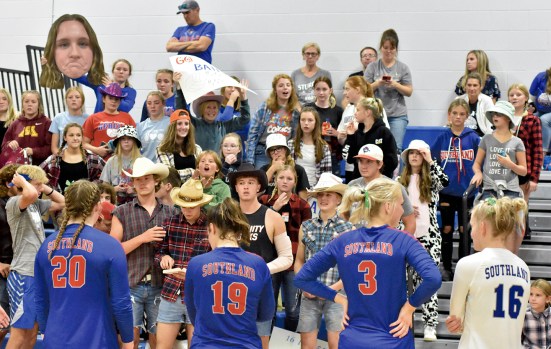 The Southland seniors were recognized after the match. Rocky Hulne/sports@Austindailyherald.com 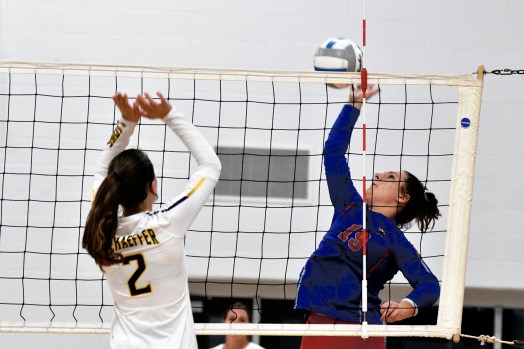 The Rebels (4-5 overall) trailed throughout the first game and were tied 7-7 in the second game before they pulled away. Southland led 14-7 to start the third game and jumped out to a 9-3 lead in the final game.

“They definitely don’t make it easy on themselves,” Southland head coach Michelle Nelsen said. “They like to get down and dig themselves out of a hole, but they seem to be successful at it, so we’re just going to take it.”

The Rebels are just over the halfway mark of the season, but the senior celebration brought out some tears from Bailey Johnson, who put up 15 kills and 14 digs. After a shortened junior season due to COVID-19, she is going to make the final stretch of her final season count the most.

“It’s a lot of emotions and it’s kind of a lot. I’m not really ready to be done, I guess,” Johnson said. “Our senior class has grown together like none other this year. We’ve definitely grown together as a class and as a team.”

The seniors, who include Johnson, Hattie Wiste, Jaselyn Sathre, Maddy Bhend, Lynsey Wilson and Katie Popenhagen, were able to start a new trend this season as they all worked as coaches for Southland’s new youth program, which teaches volleyball to fourth, fifth and sixth graders.

“It’s a lot of fun,” Wiste said. “You learn a lot about them and I wish we could’ve started playing volleyball at that age. As of right now, I”m not ready to be done and I wish I had more of it.”

Nelsen is pleased with what the senior class has given the Rebels this season as they’ve shown the way for the younger players on the team.

“I’m really impressed with their leadership skills right now. I couldn’t be prouder of how they’ve mentored the younger volleyball players on and off the court in our youth program,” Nelsen said. “I love the leadership they’ve shown with the team. Whenever one player is having a bad game, another player picks them up. They’ve really been able to shine this year and I really wasn’t sure what we were going to get.”