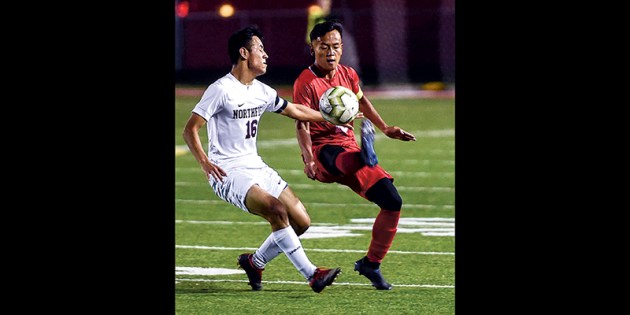 Austin’s Poe Reh puts a play on the ball in front of Northfield’s Isai Duque during the first half Tuesday night at Art Hass Stadium. Eric Johnson/photodesk@austindailyherald.com 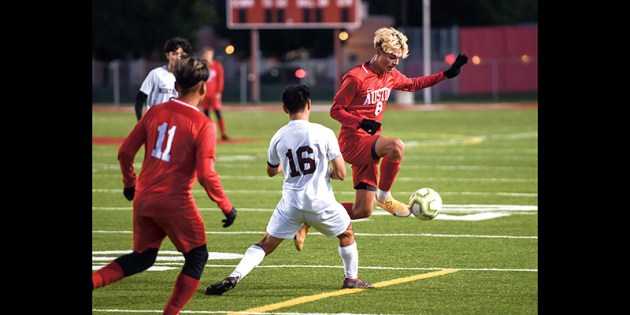 Austin’s Aidan Martinez moves the ball away from Northfield’s Isai Duque during the first half Tuesday night at Art Hass Stadium. Eric Johnson/photodesk@austindailyherald.com 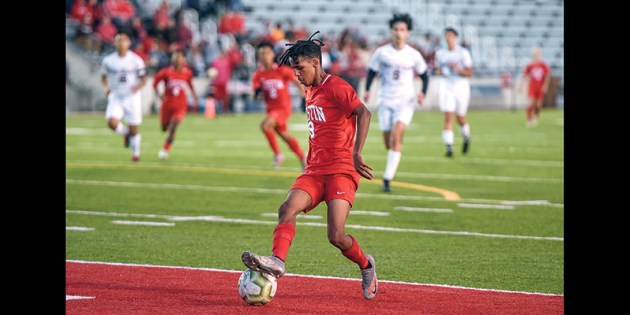 Austin’s Kaleb Tedesse settles the ball as he attacks the Northfield net during the first half Tuesday night at Art Hass Stadium. Eric Johnson/photodesk@austindailyherald.com 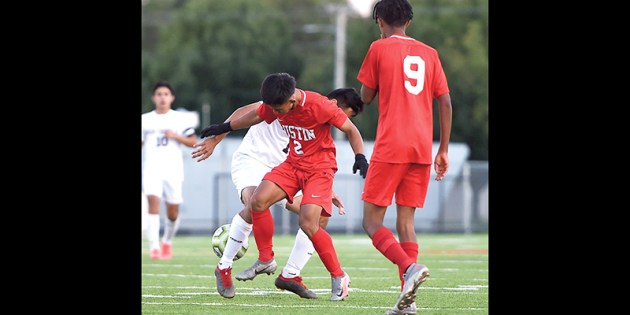 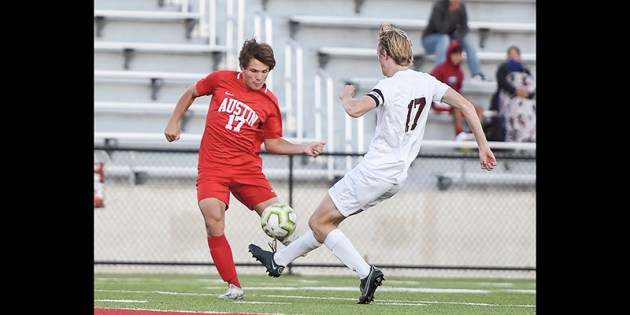 Austin’s Joe Ewing takes a swipe at the ball during the first half Tuesday night at Art Hass Stadium. Eric Johnson/photodesk@austindailyherald.com 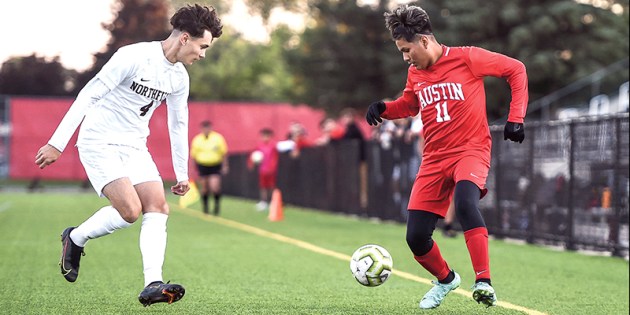 The Austin boys soccer team is growing up on the fly and its young players made some big plays in some huge spots as the Packers beat Northfield 4-1 in Art Hass Stadium Tuesday night.

The Packers (3-3-3 overall, 3-2-1 Big Nine) played the final 22 minutes one player short after being handed a red card, but they outscored the Raiders 2-0 in that stretch. Austin head coach Jens Levisen said he wasn’t going to let his team sit back and let Northfield control the pace, even with a disadvantage.

“You can’t try to camp. One goal isn’t enough,” Levisen said. “You don’t want to give them space for opportunities. It wasn’t an all out attack, but you’ve got to keep playing.”

Austin freshman Joel Thwang helped the Packers clinch the game when he hit senior Lennyn Ortiz-Reyes on stride with a pin-point pass that Ortiz-Reyes crushed into the top right corner of the net for a goal to make it 3-1 with 5:10 left in the game.

“We’ve been working harder, working together and taking good shots,” Austin senior Poe Reh said. It’s great for the young guys to step up. In the beginning of the season they were nervous and now they’re helping the team a lot.”

Austin freshman Aidan Martinez has been on a roll of his own as of late and he wasn’t about to stop against the Raiders as he put in two goals.

Martinez gave the Packers the lead when he took a crossing pass from Kaleb Tedessee and hammered it home for a goal to put Austin up 2-1 with 22 minutes left in the contest.

Tedessee was handed a red card after the goal for unsportsmanlike conduct.

The Packers tied the game up at 1-1 when Martinez, who has now scored six times in the past three games, was able to create space and drove home a shot from 15-yards out with 34 minutes left in regulation.

“We were looking for someone to step up and I felt that I had to step up,” Martinez said. “We’ve grown closer this season and we’ve gotten better.”

The Packers had to rely on back-up keeper Dane Mitchell for a stretch in the first half after starter Logan Pederson was tangled up in a collision. Mitchell made one save and Pederson finished with seven saves — including two in the final ten minutes.

Austin finished with 12 shots on goal.

Austin had struggled with its offense earlier in the season as it scored just two goals in its first six games, but the Packers have now scored 10 times in their last three games.

“We’re starting to play more of a team game like we’re accustomed to playing in the past,” Levisen said. “We’re headed in the right direction, but there is still work to be done.”