Minnesota StarWatch: The heart of Scorpius rises into the October skies 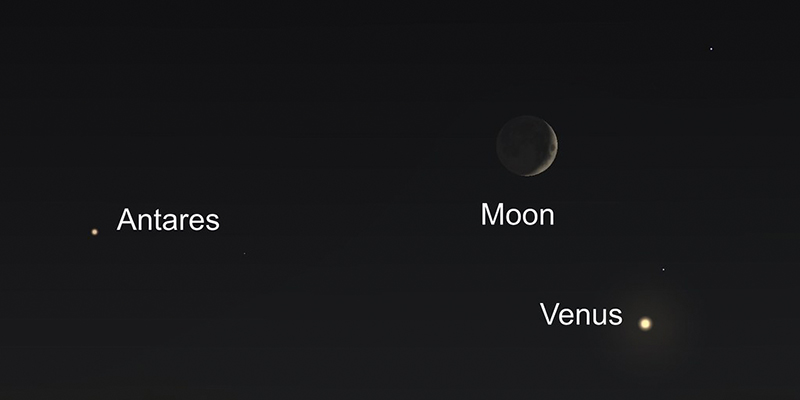 October’s darkening skies provide a backdrop for planetary maneuvers and the unending stream of stars across the celestial stage.

As Venus holds its position above the sunset horizon, Saturn, followed by much brighter Jupiter, heads westward with the stars of Capricornus. On the 9th, red Antares, the heart of Scorpius, will be left of Venus and a waxing crescent moon in the sun’s afterglow. As Antares exits the sky, it draws closer to Venus and glimmers directly below the planet on the 16th. On the 14th, Jupiter and Saturn come out above a gibbous moon. 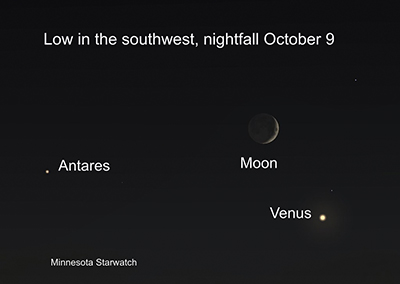 On the 7th, Mars passes behind the sun and officially takes up residence in the morning sky — which is where you’ll also find Saturn, Jupiter and Venus next year.

Facing south, you’ll see — perhaps with help from a star chart — the relatively dim fall constellations. From west to east, the main ones are chevron-shaped Capricornus, the sea goat; scraggly Aquarius, the water bearer; and two-tailed Pisces, the fishes. Fairly high in the southeast at nightfall is the Great Square of Pegasus. Below the Great Square is a pretty ring of stars known as the Circlet of Pisces.

October’s full moon arrives the morning of the 20th. To see it, get outside by about 40 minutes before sunrise or it will have set in the west. If you’re not a morning person, enjoy the moonrise on the evening of either the 19th or the 20th.

October closes with Halloween, an astronomically based Celtic holiday that was one of four “cross-quarter” days falling midway between an equinox and a solstice. On that night, evil spirits cooped up since May Day were released to wreak havoc on humankind. People left out food to appease the spirits and lit candles in gourds to ward them off; these were the forerunners of trick-or-treating and jack-o’-lanterns.

• Find U of M astronomers and links to the world of astronomy at: www.astro.umn.edu