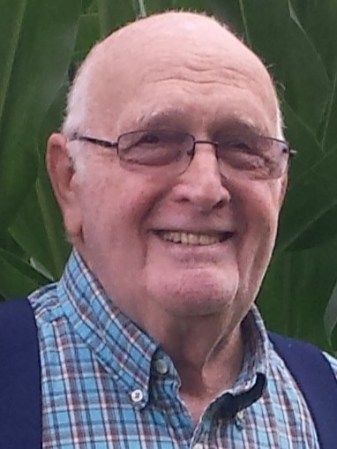 Donald Jackel, age 86, of Austin, Minnesota passed peacefully to the arms of Jesus on Wednesday, September 8, 2021 at home surrounded by his family.

Don met the love of his life, Barbara Iverson, at the Terp Ballroom in Austin, Minnesota where they danced polkas and waltzes. Don and Barb were united in marriage on January 16,1960. Don and Barb shared a strong faith and love of family. They were blessed with two biological children and “adopted” children as well.

Don learned the ethics of hard work growing up on the family dairy farm. His early work life included jobs at Claremont Creamery, Owatonna Canning Company, and Golden Dairy. The majority of Don’s career was spent selling Watkins Products and other agricultural merchandise to local farmers. He was a rural mail carrier with routes in Brownsdale and Hollandale. He enjoyed delivering the mail and worked until age 75.

Don had a big heart and a gentle caring spirit.

He loved meeting new people. He had a gift for finding a connection with every person he met. He enjoyed drives in the country to check the crops. Many of the drives included a stop for his favorite treat of ice cream. Don and Barb traveled to Branson with family and friends for many years. They enjoyed the music, restaurants, and sights of the area. Often Don was the only male in the group and he provided entertainment with his stories and sense of humor.

Don was an active member of Grace Lutheran Church for 62 years. He served on the council in various capacities for many years. His self-appointed position at Grace was to meet and connect with every new person that walked through the door. He was very successful at welcoming others and was often the last person out of church on any given Sunday morning.

A Celebration of Life will be held at 11:00 a.m. on Thursday, September 23, 2021 at Grace Lutheran Church in Austin. Visitation will take place one hour prior to the service. Interment will be at Grandview Cemetery, Austin following the service.

The family is requiring that all attendees wear masks and social distance. If you are not feeling well, please do not attend. The goal is for everyone to be safe and remain healthy.

Memorials are preferred to Grace Lutheran Church. Please share stories about Don on Worlein.com. Worlein Funeral Home is assisting the family with arrangements.

Thank you to Mayo Hospice for their support and care during the past 5 months.

A very special thank you to Angie, Julie, Alexis, Heather, Emma, and Mary.