Distinguished Alumni urge students to take up the challenge 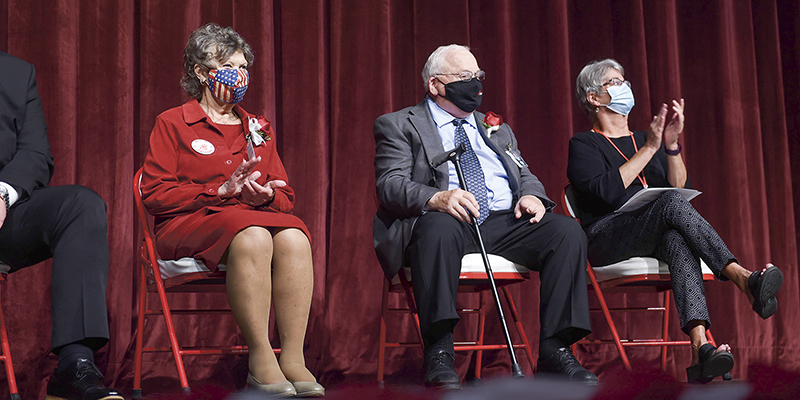 This year’s alumni were Terry Placek and Michael Ruzek, both graduates of 1964, making a total of four Distinguished Alumni to come out of that year.

The ceremony was held during a school assembly where students got to hear personally from both Placek and Ruzek as they not only recounted their time at the school, but those things they went on to do as well as words of advice and encouragement.

“They’ve taken the education they received and used it as an opportunity … to make this world a better place,” Principal Andrea Malo said during her introduction Thursday.

In a lot of ways, 1964 and the 60s in general were a significant time period, something both Placek and Ruzek noted in their remarks to students. It was during their senior year of 1963-64 that President John F. Kennedy was assassinated, having a profound effect on the student body. Placek noted how even the toughest of classmates could be seen crying at the news.

But for Placek, it was also a catalyst for what she wanted to do in life.

Placek went on to a storied career in government work, including at the Pentagon, where she was working on the day of the 9/11 attacks in 2001.

Placek urged the class of 2022 to try new things and not to be afraid of the road in front of them.

“What is important to you today is to become a lifelong learner,” she said. “Don’t be afraid to take on a challenge. Be kind, be grateful and always help others.”

While Placek eventually moved away and currently lives in Virginia while finding time to return to the state, Ruzek has been a lifelong resident who’s been involved in several community groups geared towards the betterment of Austin including Spruce Up Austin and the Austin Area Foundation.

“To be here is a wonderful time in my life,” Ruzek said. “Reflecting on past recipients, it’s been humbling.”

Ruzek lauded the education both he and Placek received and took the opportunity to remind students just how blessed they are to be receiving the same education.

“I’m impressed with the quality of education in this history and now,” he said. “Like the class of 1964, you have some of the best public education in Minnesota.”

He also reminded the students that nothing bad comes out of hard work and urged them to become a part of the community to help strengthen it.

But at the same time he touched on kindness and lamented that the word doesn’t get the respect it should.

“Kindness can happen in many ways,” he said. “Maybe today you can take a moment to think about kindness.”