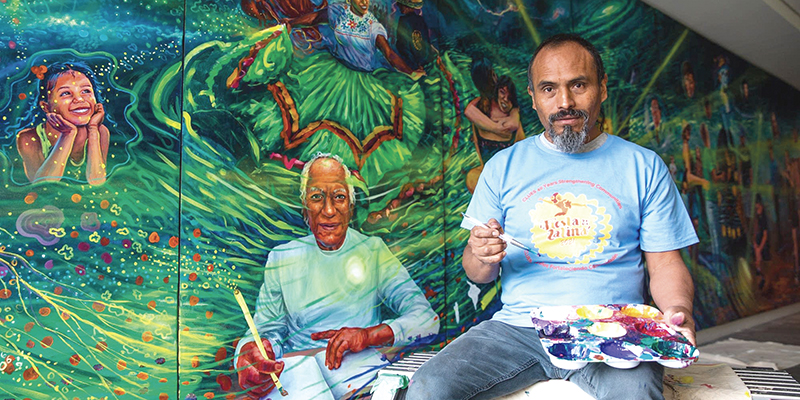 Juan Chawuk, an international artist and indigenous Maya Tojobal from Chiapas, Mexico, sits in front of his mural "Al Ritmo de la Migracion del Universo," which CLUES commissioned him to paint for the organization's 40th anniversary inside of their St. Paul headquarters. The mural is one of 40 pieces in the exhibit Muralismo Minnesotano (Minnesota Murals) which will debut on Saturday. Evan Frost/MPR News

Walk into the CLUES St. Paul offices and you are immediately drawn to the many pieces of art — 13-foot tall Catrinas, murals and papier maiche piñatas fill the first floor.

The pieces are all part of a new exhibit — “Muralismo Minnesotano” (Minnesota Murals) being unveiled Saturday at CLUES, a Minnesota nonprofit with a mission to advance social and economic equity for Latinos in the state. The exhibit celebrates CLUES’ 40th anniversary, helps kick-off Hispanic Heritage Month and will be unveiled during Fiesta Latina from noon to 4 p.m. at CLUES’ St. Paul location.

Head up the stairs to a second-floor conference room where Juan Chawuk, who is known in the artistic world as Chawuk, was busy adding finishing touches to his mural. He calls it “Al Ritmo de la Migracion del Universo,” which roughly translated means “To the Rhythm of the Universe.” The mural is made up of eight panels and measures 32 by 8 feet.

Chawuk, an international artist and indigenous Maya Tojobal from Chiapas, Mexico, was invited by CLUES to be the guest artist and to create the mural, said Aron Johnson-Ortiz, the organization’s Latino arts and cultural engagement director.

The exhibit includes 40 pieces of art: half are murals and the rest are sculptures, Johnson-Ortiz said.

Chawuk’s mural begins with children. He uses the universe and the cosmos as its backdrop.

“Children are more conscious of our reality and less preoccupied with materialism, which is learned. Well sometimes that’s not true because we’re taught to be consumers,” Chawuk said.  “But they contemplate. And that’s the beauty of children — they contemplate life, the details.”

The mural itself conveys a message of healing and growth. And that fits with what CLUES does, said Johnson-Ortiz.

“Our motto is ‘la cultura cura,’ which is ‘culture heals,’ and so it ties art and culture engagement to all of our work,” he said.  “Forty years is a long time to be growing as an organization.”

Muralismo Minnesotano emphasizes the origins of muralism as an artistic and social movement in Latino culture. It also coincides with the 100th anniversary of the muralist movement. CLUES is celebrating both anniversaries with the exhibit, he said.

“It’s really important to honor our history and honor our ancestors, our aesthetic and artistic ancestors. This is the 100-year anniversary of the muralism movement, which began in Mexico. And it was a way of bringing art to the people, a way of educating the community, a way of telling history, a way of telling stories,” Johnson-Ortiz said.

Murals are not simply wall paintings, he said. There is a long social, cultural and political history that goes along with the muralism movement. Murals are part of the Latino culture and history, he said.

As you gaze at Chawuk’s mural, your eye is drawn to the giant tree in the center. The tree’s trunk has a door almost like a portal, with rays of light shooting out.

“Well, for me, the tree is like vegetation, nature, and all that is marine vegetation as well, and all that is cosmic vegetation, mental vegetation,” Chawuk said. “It’s a cosmic tree, a marine tree, a tree of time, a tree of culture. A tree from which light emerges and trickles onto the skin of everything that moves. So, if we are conscious of this, we can push aside the emotional roadblocks, the traumas and all of that. And we begin to move toward a broader, better and more healthy freedom.