Chasing with poise: L-O’s leader is reserved off the field but explosive on it 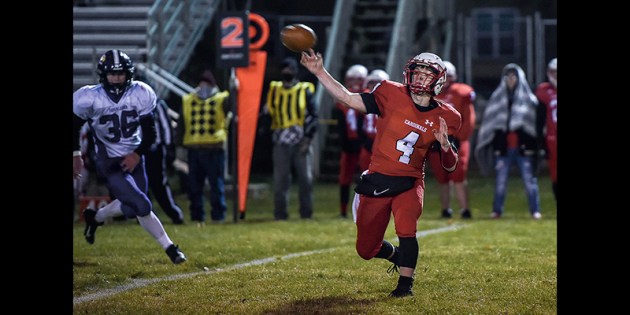 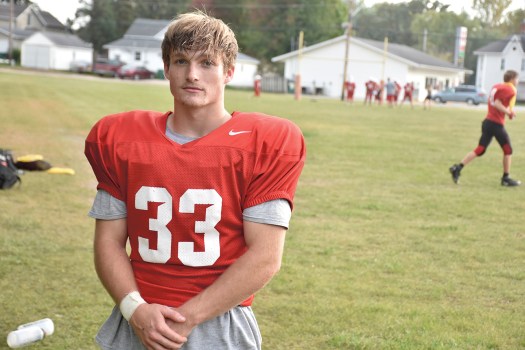 LeRoy-Ostrander senior Chase Johnson has led the Cardinals to a 3-1 start this season as he’s been a dual threat at quarterback. Rocky Hulne/sports@austindailyherald.com

LEROY — Chase Johnson is usually the shortest player on the field and he’s often quiet and mild mannered. But nobody is looking past the senior quarterback when the football is in hands.

All of that impact comes with a lot of pressure, but Johnson is not about to let it wear him down. He’s also not taking all of the credit.

“I know that I’m going to have solid blockers in front of me,” Johnson said. “That’s where it starts and that’s why I’ve gotten all of the yards that I have. I’ve got some big boys in front of me making some pretty cool blocks.”

Johnson rarely leaves the field on game nights for the Cardinals as he plays special teams and defense as well as offense.That means he has to manage any injuries he has throughout the week and also has to make sure that he’s mentally prepared to carry the load.

“I worry quite a bit. I use a lot of deep breathing to try and keep my cool and I do what I can,” Johnson said.

Gavin Sweeney has paved the way for a lot of Johnson’s runs over the years and he’s seen up close how athletic and elusive Johnson can be in the open field. Johnson’s running style can make it unpredictable for linemen, but they have trust in him to find the hole.

“He’s a lot of fun to block for. Sometimes it’s hard to know where he’s going to go with it, but he does it for a reason,” Sweeney said. “Chase is very humble and he’s very calm all of the time. Even if we miss a block, he’s always there to tell someone how to get better at it instead of chewing them out. He’s a good leader.”

Johnson has memories of admiring Spring Grove grad Alex Folz’s running style when he played against him as a freshman in 2018, but the L-O playmaker has tried to play the game his way.

“I try to be myself. I don’t really try to look up to anyone,” Johnson said. “I try to do the best I can and provide for the team. I’m just doing it for my teammates. If you have a bad game, you let your teammates down.”

Johnson has started for the Cardinals since he was a freshman wide receiver and he’s been the team’s starting quarterback since current head coach Trevor Carrier took over the program in 2019. Carrier said that Johnson gives the Cards a steady leader, who always stays level headed.

“Chase is an easy kid to coach. He does all of the drills to get better and he never thinks of himself as better than or above anyone,” Carrier said. “He was shocked when he won District Player of the Year last year and gives credit to the guys in front of him. He listens well. Some things we call for him and sometimes he just does his thing. That’s not a bad thing.”

The Cardinals have already had two showdowns with top-10 teams and they’ve had mixed results. They beat No. 8 ranked Mountain Lake Area 33-6 last week and they lost to No. 3 Lanesboro 38-27 on Sept. 17. Mountain Lake was previously ranked No. 1.

The Cardinals will play at Grand Meadow at 7 p.m. Friday.