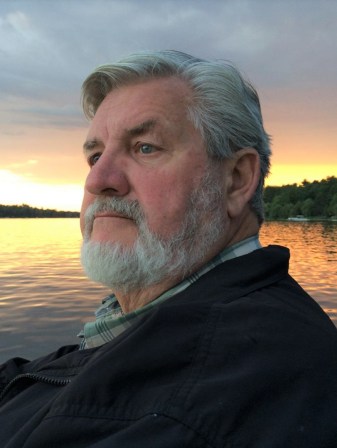 John Gary Donahue, age 78, of Austin, MN passed away on Saturday, August 7th 2021 while vacationing with his family in Hayward Wisconsin. John was born April 28, 1943 in Minneapolis MN to Bernard and Marguerite (Uetz) Donahue. He attended Bloomington High School and Minneapolis School of Associated Arts “where he got all A’s.” He enlisted in the United States Marine Corps from 1961 – 1966. John married Nancy Holmes in Watertown, MN in 1971 and together they had three children. John was able to use his creative mind and artistic talent while employed by Smyth Companies for more than 30 years. John was a member of St. Olaf Lutheran Church and the Early Risers Kiwanis Club. John was born with a “wee bit of the blarney” which he carried with him throughout his life and shared with all he met. John could strike up a conversation with anyone and easily make you laugh. He thoroughly enjoyed life especially traveling, riding his bike, annual fishing trips, family summer vacations, and spending time with his grandkids.

A visitation will be held from 10:00-12:00 p.m. on Friday, August 13, 2021 at St. Olaf Lutheran Church in Austin, MN, with funeral service to begin right after at 12:00 p.m. Interment will be at Fort Snelling National Cemetery on Monday, August 16, 2021. Worlein Funeral Home of Austin is assisting the family with arrangements. Condolences may be expressed to the family online at www.worlein.com.