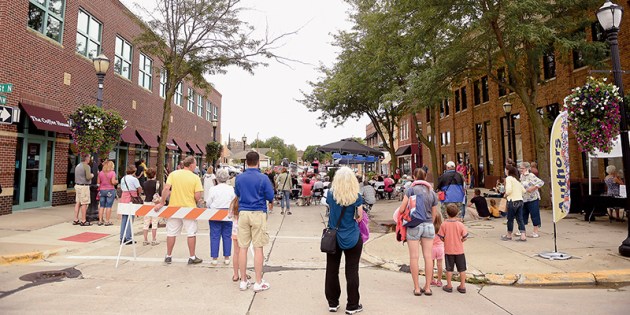 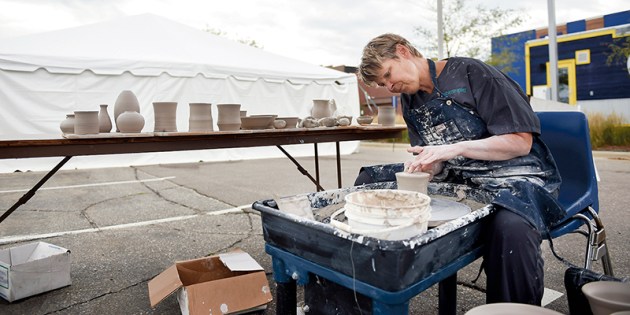 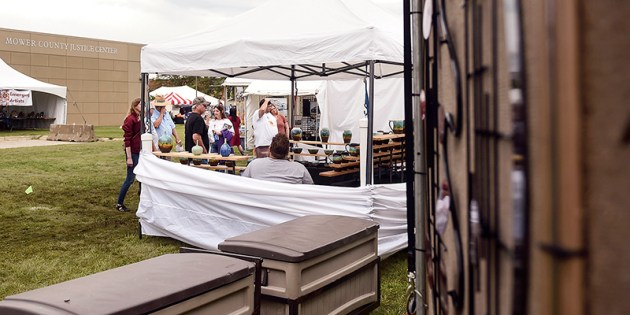 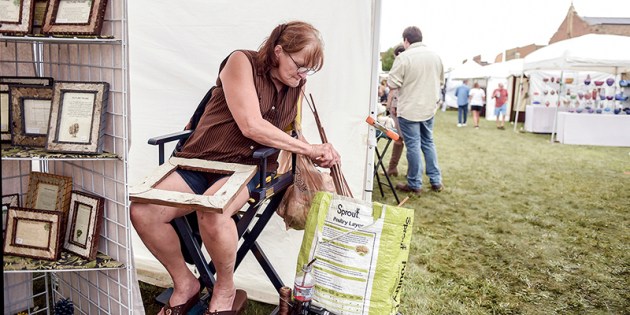 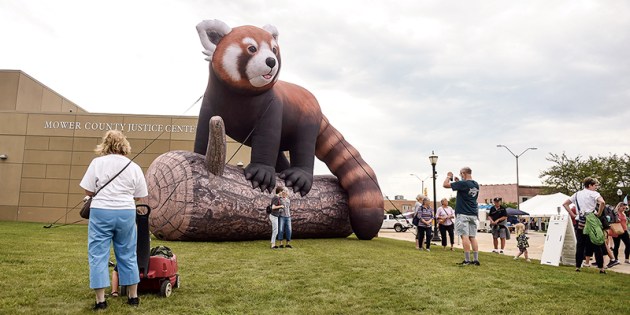 People pose for a photo underneath the 25-foot inflatable sculpture of a red panda, brought down by the Minnesota Zoo on Saturday for the Austin ArtWorks Festival. Eric Johnson/photodesk@austindailyherald.com. 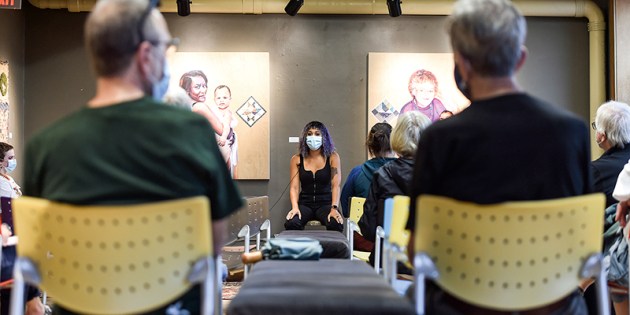 One thing is for sure — the 10th Austin ArtWorks Festival is going to be one to remember.

Between being able to host the first full festival since 2019 and the near constant rain, organizers were able to pull together a festival like few others.

“I’m so thankful that second day was a good one … because that’s what you’re leaving with,” said co-chair Bonnie Rietz.

Starting Thursday, rain and storms were constant companions of the festival. Rain was present when they were setting up Friday and with the festival throughout the day, with featured artist Leslie Barlow commenting on the atmosphere the thunder provided at the beginning of her Artist Talk Saturday morning.

However, everybody from organizers to volunteers to vendors persevered and were rewarded with a perfect sunny Sunday afternoon.

“One of the things we judge by is how the artists do. Are they selling well?” Rietz said. “Literally, everybody did well. One said they sold $4,000 over the weekend. Another said that it was their best weekend of the year.”

By that standard, and several other standards over the weekend, the 10th anniversary was a success.

“It certainly wasn’t a negative I don’t think,” Rietz said.

“Because of weather, it was a bit of a rough start, but Sunday it felt like a really great event,” Helle said. “I think people loved being out and seeing other people. Vendors and exhibitors had glowing compliments about Austin and the Austin people.”

Helle estimated that attendance was down from 2019, but that when you bring everything together, this past weekend’s event reached expectations.

“With COVID, we didn’t know what to expect,” Helle said. “Our attendance numbers were about half of 2019, but between COVID and half of our weather was rainy and stormy, I feel like, considering all of the circumstances, attendance was as good as we could have hoped for.”

The bottom line was that the 10th anniversary festival was emblematic of a thriving arts scene.

“The bottom line is we want to bring great arts and cultural experiences to our community,” Helle said.

While the festival itself was deemed a success, Rietz confirmed that it was the people behind the scenes that really showed how committed they were to the effort.

Despite the hurdles, everybody came together to get the job done.

“It’s so amazing how people can be flexible and can rally,” Rietz said. “What we went through Friday: the pouring rain, the tent set-up and the soil was soggy and wet and then coming back Saturday morning and it happened again. There’s just a bunch of examples of resilience. We have a wonderful staff.”

The planning committee of the festival will now begin the task of evaluation, including getting vendor feedback, and figure out what worked and what didn’t. After that, there will be a much-welcomed break before getting back at it in January for the 11th festival.

“We’ll take some time to catch our breath and then people are ready and energetic and have their enthusiasm back,” Rietz said.