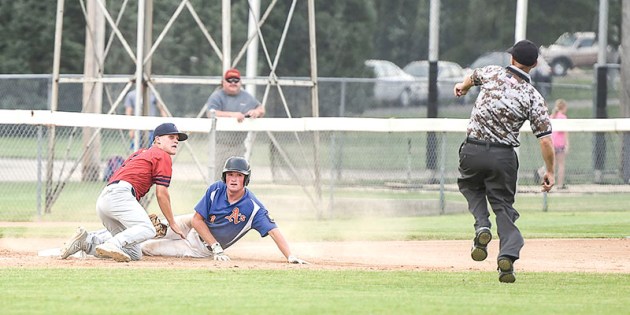 Austin’s Zach Bollingberg looks up for the call after tagging out Rochester A’s runner Matt Haun on a play at third during the quarterfinals of the Sub State District 1 Tournament Wednesday at Marcusen Park. Eric Johnson/photodesk@austindailyherald.com 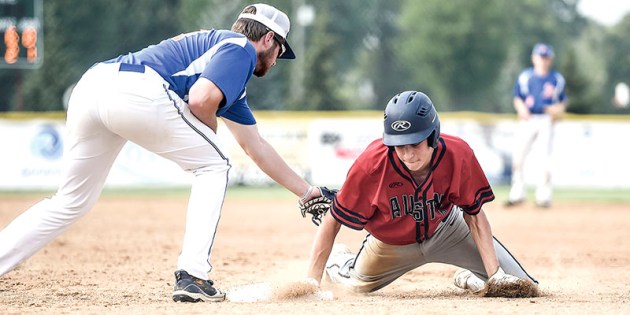 Austin’s Jordan Ransom dives back into first on a pick-off attempt Wednesday in the Sub State District 1 Tournament at Marcusen Park. Eric Johnson/photodesk@austindailyherald.com 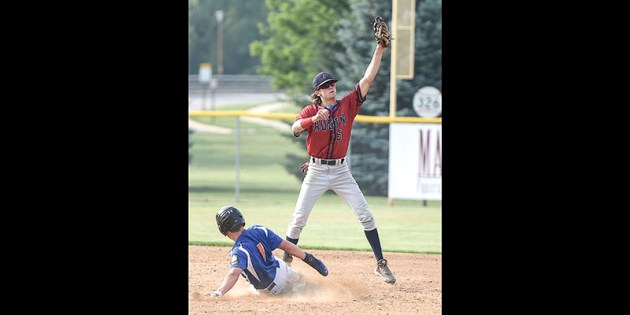 Austin shortstop Tony Ciola reaches up for the ball to get the force out at second against the Rochester A’s Wednesday in the Sub STte District 1 District Tournament at Macusen Park. Eric Johnson/photodesk@austindailyherald.com 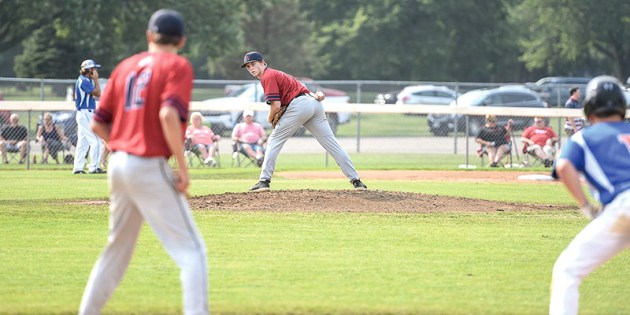 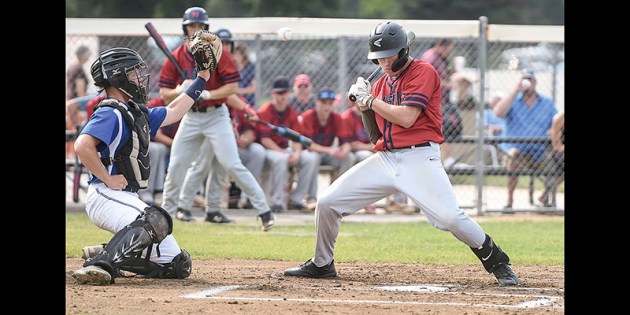 Austin’s Teyghan Hovland leans back from an inside pitch against the Rochester A’s Wednesday in the quarterfinals of the Sub State District 1 Tournament at Marcusen Park. Eric Johnson/photodesk@austindailyherald.com

The Austin Post 91 baseball team were the very definition of never giving up Wednesday,  as they defeated the No. 2 seed Rochester A’s 13-6 in the quarterfinals of the Sub State Division 1 Tournament at Marcusen Park.

Down 6-5 going into the top of the seventh inning, the No. 3 seeded Post 91 poured on eight runs to close out the game and move on to the semifinals Friday, where they will play at 1 p.m. against the winner of Owatonna and the Rochester Redhawks game.

Jordan Ransom kicked off the scoring when he singled to drive in Zach Bollingberg and Jed Nelson to give Austin a 7-6 lead and in turn open the floodgates in the top half of the frame.

“Everyone hit the ball really well today,” said Ransom, who finished the night by going 3-for-3 including a double. He also scored four of Austin’s runs. “We’re glad to be back and be able to produce like we did today.”

Hovland said Post 91 never gave up despite playing from behind for most of the game.

“We only needed to score one run,” Hovland said. “Once we plated that it was a confidence booster. It’s just hanging on to that confidence.”

The came started ominously for Austin in the bottom of the first inning when Rochester was able to take a 2-0 lead. One of those runs came on a miscommunication between right fielder Sam Nelson and Hovland in center resulting in a collision and the ball dropping for error.

However Post 91 whittled away at the lead to tie the game in third when Tanner Murphy scored off a double by Bollingberg. Austin would tie the game again later in the fourth inning, but both times Rochester had answers.

The A’s Josh Fletcher blasted a two-run shot to left field to give Rochester a 4-2 in the third and Peter Lynch pulled the ball over the right field fence in the fifth for a 6-4 lead.

Austin managed to hang around despite the two homers, setting up the big comeback.

“Right away you have to respect what they did,” Ransom said. “We knew right away we had to come back and put some runs on the board.”

Sam Nelson had a monster day at the plate going 4-for-5 with 2 RBIs and two runs scored.

Walter collected the win on the mound, coming in for relief in the bottom of the sixth for Copley, who started the game.

Austin is now in the driver’s seat as they advance to the semifinals undefeated in the double-elimination tournament.

“We have all the confidence in the world,” Hovland said. “We just need to keep that confidence rolling. Teams have to beat us twice now.”