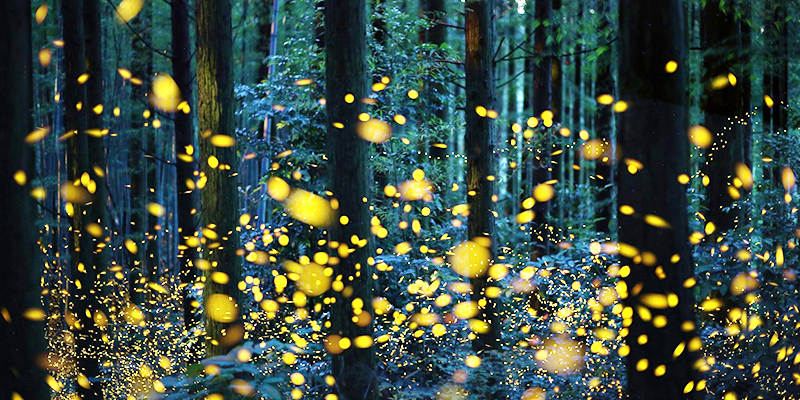 There are few creatures on this planet that don’t amaze me in one way or another, but I will never forget the first time I saw a firefly as a kid. I felt a lot of different things – disbelief, wonder, the unrelenting need to catch it and put it in a jar – but mostly curiosity. How did they come to be? How do they light up, and why? Is there actually a little lightbulb in there or is something magical going on? All of these questions my mom couldn’t answer at the time, but luckily for you, this Nature Note is here to help.

Firstly and most importantly, fireflies, or lightning bugs, are not made of fire or lightning and are not flies or “bugs.” Fireflies are, in fact, a type of beetle. Beetles are in the Coleoptera order and there are over 350,000 known kinds, making them the species with the most variation on our Earth. In fact, one out of every four animals on Earth is a beetle.

While most of us have one creature in mind when we think of fireflies or lightning bugs, there are actually 150 known beetle species that we call “fireflies” in North America, and over 2,000 in the world. They can be found on every continent on Earth, except Antarctica.

Not only is there an impressive number of firefly types in the world, there is a lot of variety in their shapes, sizes, and behaviors. Some fireflies are tiny, while others are as large as your palm. Some fireflies flash impressively, and some don’t flash at all. Instead, they use pheromones to communicate rather than flashes of light. Some even predate other firefly species!

While there is a lot of variation among firefly species, their anatomy remains constant. Their long, soft bodies light up at the end of their abdomen in a part of their body called a “tail-light” (there is, sadly, not a tiny lightbulb in their stomachs like I believed when I was younger). Their ability to light up is thanks to a chemical reaction in their bodies, where a compound called luciferin, which is created in the light-producing organ, is oxidized. Fireflies can control the duration and intensity of their blinking by how much oxygen they take into their abdomens.

Their ability to blink is used as a mechanism for reproduction, allowing for members of the opposite sex to find each other at night. Scientists also believe that their blinking may have evolved as a warning to predators that they’re toxic – fireflies release toxic droplets of blood when attacked as a defense mechanism.

Blinking patterns are used as communication between fireflies. The duration and intensity of their blinking can determine their likelihood to mate and reproduce. Brighter, faster blinks tend to be more appealing. Their blinking patterns are also individualized for each species of firefly; some species blink only once and others blink up to nine times, all while the females sit on the ground waiting to be impressed.

Fireflies go through metamorphosis just like all insects. They hatch from eggs into larvae, then metamorphose into pupae before finally reaching adulthood. The larval stage is often the longest phase of a firefly’s life. All firefly larvae can glow. They grow underground and are often ferocious predators, eating anything and everything in their path, including but not limited to snails, slugs, and worms.

Because of habitat loss, pesticides, and light pollution obstructing reproduction, firefly populations are fading fast. While the full extent of species loss is not known, their decline is indisputable. Conservation efforts have begun across the planet by preserving their habitat, raising larvae to be released, and reducing pesticide/herbicide use. Simple ways that you can help the fireflies include turning your lights off during their breeding season and reducing your pesticide use.

After all, July isn’t really July without fireflies.