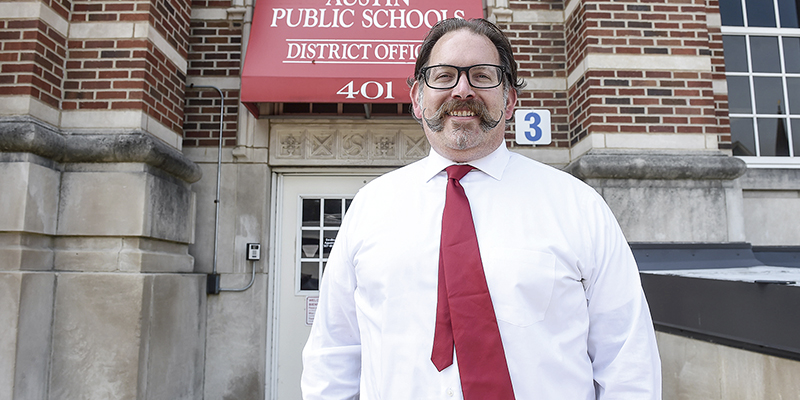 Dr. Joey Page has taken over the reins of the superintendent position at Austin Public Schools, filling the role left by David Krenz, who recently retired. Herald file photo

In some ways, Dr. Joey Page never really left. The Austin native always had an eye on coming back home.

“It’s your hometown and you are trying to stay connected in a way,” Page said on one of his first official days as Austin Public Schools superintendent. “It’s special [knowing] where you come from. I would check in to see where they were at and see how that has grown.”

Page was talking from the very room where earlier in the week, David Krenz attended his final meeting before retiring. It was the completion of a homecoming for Page, who had held down the post in Byron for four years.

“I look back at it and at the time it was the right place, the right decision and the right moment for that,” Page said. “Byron is very progressive and that was an interest for me coming out of the Cities.”

However, this path almost didn’t happen. It required a change in direction late into pursuing a degree in psychology and criminal justice at South Dakota State University in Brookings, South Dakota, a very late change of direction that came in the last semester of his time at SDSU.

“It was probably the wrong time to start figuring that out,” Page said with a laugh.

This change in studies came after Page began to realize that those two areas of study probably weren’t what he wanted to do. Instead Page said he began looking back to his experiences when he walked the halls of the Austin school district.

Austin Public Schools Board Chair Kathy Green sports a mustached mask as Dr. Joey Page, APS’ new superintendent laughs. During Monday’s board meeting, all the board members good-naturally sported the masks as they welcomed Page to his first board meeting. Eric Johnson/eric.johnson@austindailyherald.com

He remembered how good his time was and remembered the quality education he received.

“I should be teaching and I remember thinking back to all of the high caliber teachers and the rate of influencers from kindergarten all the way through to that last day of senior year,” Page remembered. “People that really made an impact on my life and I wanted to have that same impact so I changed my focus to elementary education and special education.”

He enjoyed a boost in technology that DSU specialized in and after graduating took his first job as a fourth grade teacher in the Bloomington Public Schools District, first at Ridgeview Elementary before teaching third and fourth grade at Washburn Elementary.

Ironically, it was while working under Principal Jon Millerhagen at Washburn that Page began looking at leadership roles. Millerhagen, prior to working at Washburn, had been principal of Neveln Elementary.

Page transferred into the media director position for four years before eventually becoming principal for Yellow Medicine East Schools and then principal in the Richfield School District for 13 years at two different buildings.

Then it was on to Byron and Austin, where he was able to find a bit of familiarity.

“Obviously Steve’s and George’s moved,” Page said, once again laughing. “There was the other part too. I was away for quite awhile.”

There was, in his words, some muscle memory of being back, but Page had some things to get used to at the same time, changes that inevitably happened after being away from the familiar for long periods of time.

Still, it doesn’t take away from the joy of being home.

“There’s still some things that are the same, but being away and coming back is a really sweet emotion,” Page said.

In coming back to Austin, Page sees reflections of experiences in other districts of his education tenure. For sure he sees the progressive push APS has shown that strongly mirrors Richfield and is seeing a growth in Byron.

“A diverse school and community is great to work with and to be a part of,” Page said. “I enjoyed that and had great success with that.”

Page is looking forward to continuing that progress that has been a core feature of the APS district. To do that, Page is setting in motion a plan to be a part of the community and to know as much about it as possible.

From that, Page sees those steps as leading to an overall continuation of what the district has accomplished thus far.

“We’ve moved into the community, my kids are going to be walking these halls at the school,” Page said. “Just being involved as a community member first and also as a superintendent. I think being present and building on the work that’s been foundational and taking it to new levels.”

To that end, Page has set goals to build relationships and connections throughout the community, a chance to reintroduce himself to Austin.

However, to meet those goals, Page also recognizes the challenges. As the state comes out of the COVID-19 pandemic, one of the biggest hurdles will be recognizing a level of normal and then answering the question, how does the district make it that far?

It’s nothing new. Districts throughout the state will have to clear that hurdle.

“We’ve talked about a lot of this in Byron. Just the reunification process,” Page said. “Having all kids back to a normal schedule or even staff that haven’t been able to work together closely. How do we come back at full strength knowing that the last year and a half it’s been very different?”

Whatever the answer, Page is ready to take over a district with a strong base as he recognizes the work Krenz and the rest of the administration have done during that time in the years prior.

Page is ready to carry the district forward.

“I think it just says so much about [Krenz] as a person and as a leader to be so open and so welcoming,” Page said. “You could really see quickly his care for the district and how important that was.”

“That was something that was really important for me and quite the shoes to fill,” he added. “His tenure here has been just exceptional and highly regarded for the work he’s done and to be able towork alongside him and transition into this has been very special.”