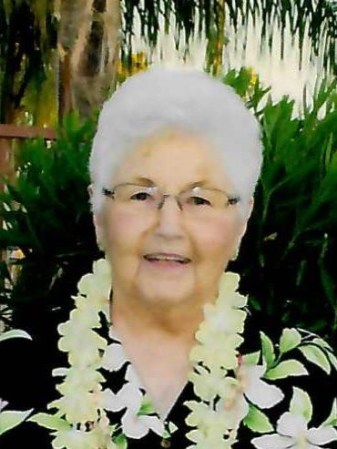 Carol was born in Austin, Minnesota on October 21, 1936 to Clifford and Clara “Dollee” (Campbell) Barclay. Carol graduated from Austin High School in 1954 and attended Iowa State Teacher’s College (now known as the University of Northern Iowa). She married John “Jack” Kline on February 2, 1957 at Queen of Angels Catholic Church in Austin. Carol lived on the family farm for 59 years.

Carol worked at the Lyle School and the London Elevator before going to work at the London branch of Sterling State Bank, and after it closed, she moved to the Austin branch. After her retirement, she volunteered at the Red Cross.

She was active on the Board of the Cedar City Cemetery Association for many years and was a faithful member of Queen of Peace Catholic Church in Lyle where she was also a member of the Rosary Society. Carol loved tending to her flower garden, bowling, square dancing, cross stitching and traveling. She was one of the founding members of the Lords of London Snowmobile Club. She spent many enjoyable winters in Arizona. Carol will be fondly remembered for the frosted sugar cookies for the holidays and also her ginger snaps.

A memorial Mass will be celebrated at 2:00 pm on Friday, July 16th at Queen of Peace Catholic Church in Lyle with Father Antony Arokiyam officiating. Visitation will be at the Clasen-Jordan Mortuary on Thursday from 5-8 pm and at the church one hour prior to the service. Interment will be at Cedar City Cemetery.

Memorials are preferred to the Lyle Area Cancer Auction or the Lyle Memory Gardens.