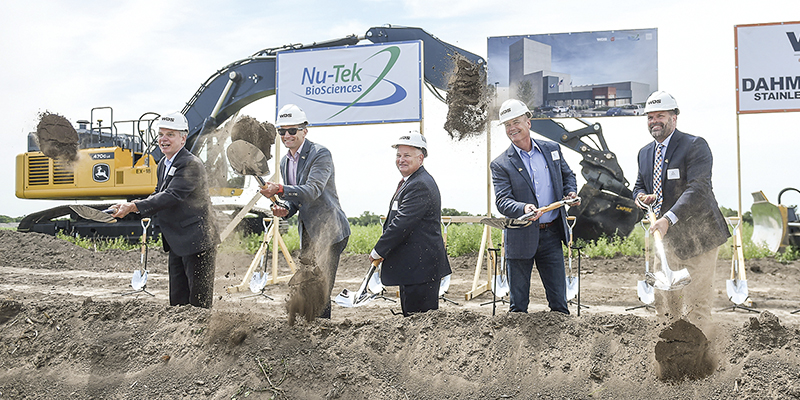 Mayor Steve King summed up Tuesday’s groundbreaking for the new Nu-Tek Biosciences  facility in Austin about as well as you could.

“This will be transformational for our community with regard to future business development and job creation,” King said in his remarks.

New businesses in a town the size of Austin will almost always create  a buzz and Nu-Tek is certainly living up to that. The Minnetonka-based business is set to build a $40 million facility that will be the first in the nation to develop peptones for the pharmaceutical industry without using animal testing.

The facility will create between 35-40 jobs. In total that’s a whole lot of good coming to our community and it promises an optimistic future where more businesses can see the successes and choose Austin as a home.

The Development Corporation of Austin, along with the City of Austin and Mower County and Nu-Tek, have worked hard over the two plus years to successfully bring Nu-Tek to Austin.

They prove to be a perfect fit for the goals of the types of businesses Austin wants. DCA President and CEO John Garry has said often that the right business to come to Austin will be one that fits into the business environment already in Austin, an environment that includes Hormel Food Corporation, The Hormel Institute and Mayo Clinic Health Systems, just  to name a few.

“The CDA has been focused on the enormous potential for economic growth in food, agriculture and bioscience,” Garry said Tuesday. “Nu-Tek’s animal-free growth media is a really good complement to our local and regional economy.”

Nu-Tek makes sense for Austin and Austin makes sense for Nu-Tek. Nu-Tek CEO Tom Yezzi said that part of the allure of coming to Austin was just that — a chance to be part of a strong manufacturing background.

“We really looked at Austin because they have a very rich manufacturing history,” said Yezzi prior to the event. “It’s really the proximity to the healthcare industry with Mayo Clinic Health System and The Hormel Institute.”

This new facility will only help Austin in the future and should raise a flag to other businesses that Austin is where they will want to be in the future. It’s a prime opportunity with plenty of hard-working people ready for success across the board.

Ask A Trooper: Call 911 if you see a road hazard

Annie Lane: Coping with allergies around the holidays