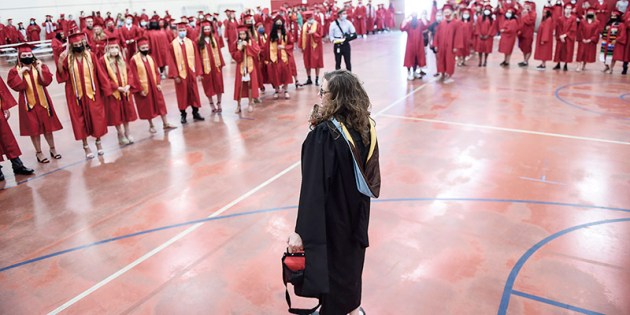 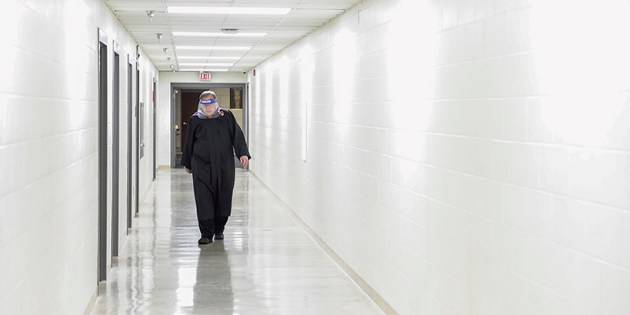 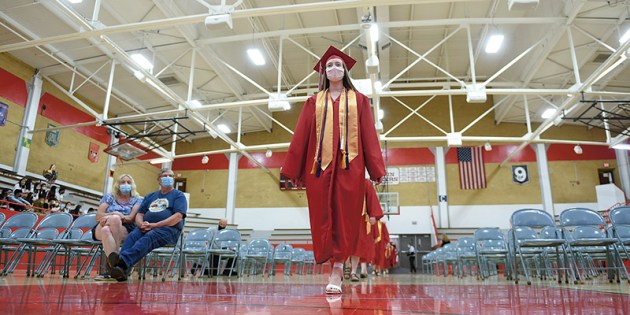 Austin graduates of the Class of 2021 make their way to Knowlton Auditorium for commencement Friday night. Eric Johnson/photodesk@austindailyherald.com 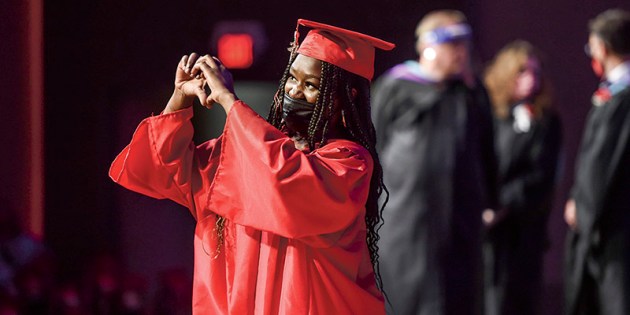 Raenecia Liddie Blake flashes a heart with her hands to family and friends during commecement for the Class of 2021 Friday night at Knowlton Auditorium. Eric Johnson/photodesk@austindailyherald.com 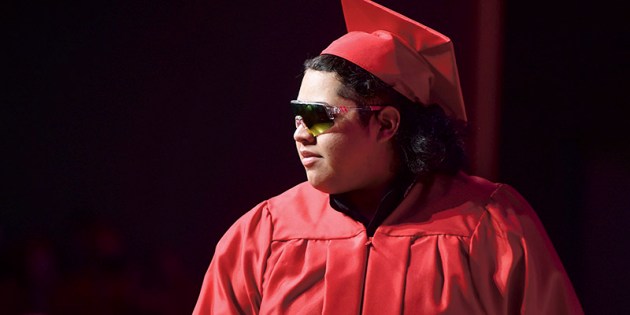 Luis Nieto Vasquez looks out to the audience from behind mirrored sunglasses during the processional Friday night at the Austin High School commecement in Knowlton Auditorium. Eric Johnson/photodesk@austindailyherald.com 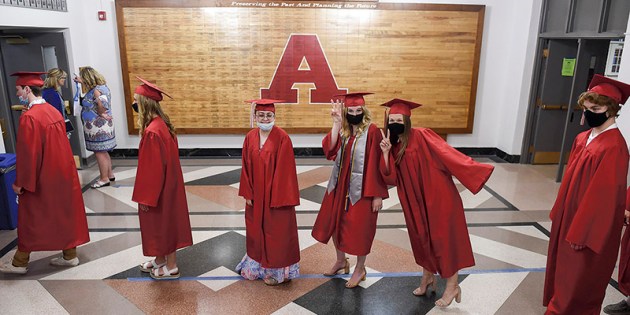 Austin graduates pose for a picture during the processional of commencement exercises Friday night at Austin High School. Eric Johnson/photodesk@austindailyherald.com 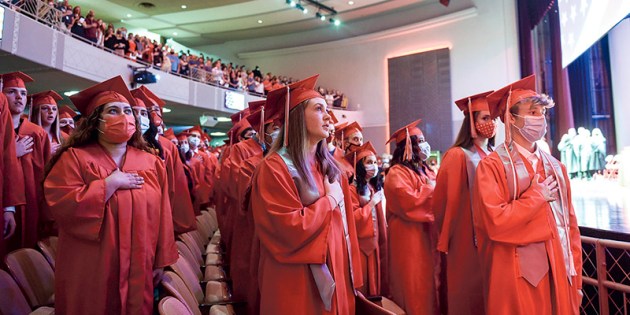 Members of the Class of 2021 stand for the Pledge of Allegiance during the AHS commencement ceremony Friday night in Knowlton Auditorium. Eric Johnson/photodesk@austindailyherald.com

They had made it.

After over a year of questions and uncertainty brought on by the COVID-19 pandemic the Austin High School Class of 2021 had their day.

They had made it.

“It’s really good,” said Principal Andrea Malo before the start of the 145th Austin High School commencement Friday night. “We really wanted the kids together in one space and I know it was really, really important to them to be together.”

Even up until the last couple months there was a question of whether or not the school would be able to host a single ceremony for all of the seniors in one place, with Malo going so far as to tell the School Board there was a plan for two ceremonies in place.

But days after she made the announcement, Gov. Tim Walz dropped restrictions that would have kept the ceremony broken into two. It was now one ceremony and it left plenty of people happy.

“Everybody had the perseverance and wanted to graduate together,” said Riley Haugen, who will be leaving to join the US Naval Academy later this month. “Everybody had this camaraderie going through this together.”

Graduates gathered in Hastings Gym and as they walked through Over Berven Gym to Knowlton Auditorium the thrill of the moment was clear.  Hoots and hollers came from the crowd as each student walked on the stage of Knowlton lending spirit to the event.

It was a far cry different from the beginning of the year when questions floated around as to what the year would be like. AHS went through a hybrid learning model that split the Class of 2021 into two groups — one group going to school two days a week and the other group attending the last two days.

But as the year went on, seniors were able to experience many of the things they would have in a normal year, even if events like homecoming were held in the spring rather than the fall.

“I was feeling a little bit nervous, but I was excited to have something you have had in a normal year,” Haugen said. “I pretty much had all the experiences I could hope for.”

That kind of strength was recognized by Superintendent David Krenz in his remarks before the gathered students, family and friends.

His first year as superintendent of Austin Public Schools, these same seniors were first-graders. Krenz told the class that earlier in the week he was looking back through past photos and compared these students to his own three sons.

“You are the 145th class to graduate from AHS. That’s quite a history,” Krenz said. “This class started its educational journey the same year I started as superintendent in the Austin School District. My three sons had their challenges, but not like this class. What you learned came about through challenge. You found ways to overcome it. You made it through.”

With this class starting its educational journey the same year Krenz started his journey in the APS district, it seemed apt that they would be the last class of Krenz’s tenure. Krenz is retiring at the end of this year, something that isn’t lost on the district as a whole.

“He’s had a huge impact on the kids and the staff, but also on me personally,” Malo said.

For the seniors Saturday night, commencement brought their time at AHS to an end as they now look through the open door to the future.

Haugen said he hopes his class takes the strength they found during the school year and brings it with them into the future.

“I would say we all feel closer and connected because of this whole thing we’ve gone through,” he said.

But it was Krenz that encompassed the emotion of the night with some of the final words of his speech to the students.

“We’re all very proud of what you have become and what you will be,” he said.