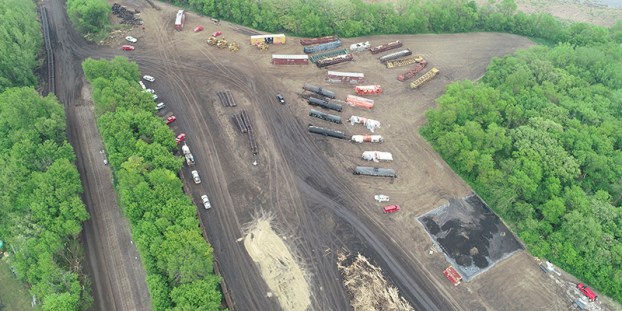 The Union Pacific train line that was down because of a derailment was back up and running again Wednesday afternoon, Freeborn County’s emergency manager said.

Crews worked around the clock since the derailment Saturday to clear the rail of debris and damaged cars.

Ongoing monitoring of pH levels in Goose Lake and the area near the derailment is showing improvements, though the impact of the hydrochloric acid spill continues in some areas, the Minnesota Pollution Control Agency said Thursday.

Water monitoring is taking place at six locations near the derailment site, including in an unnamed creek near Bridge Avenue, the wetland and creek 100 feet west of the site, three locations in Goose Lake, and one unnamed creek near the intersection of Greenwood Drive and Hammer Road. Sampling is being done by GHD, a contractor hired by Union Pacific.

Authorities have stated 40,000 gallons of hydrochloric acid spilled during the derailment, which took place Saturday afternoon. Once all of the derailed cars were removed from the Union Pacific property along the lake, responders have worked to neutralize the acid in the soil with the use of soda ash and in Goose Lake with crushed limestone to raise the pH to a healthier level for fish and other aquatic wildlife, said Cathy Malakowsky, communication strategist with the MPCA.

Malakowsky said generally fish and other aquatic life do best in pH levels of between 6.0 and 8.0.

Malakwosky said there have been multiple observations of jumping and swimming carp throughout the lake, as well as floating mussels and snails. Most avian wildlife was observed avoiding the areas with lower pH.

She said though three dead carp and one large-mouth bass was observed, this is not considered a fish kill — which is technically defined by having five or more dead fish of the same species in the same area around the same time.

No other deceased wildlife was observed.

At the direction of the MPCA, an independent contractor is also onsite performing independent sampling and monitoring for a Natural Resources Damage Assessment. For this assessment, the state assesses the environmental harm from an incident and can seek compensation from the responsible parties to restore what was lost.