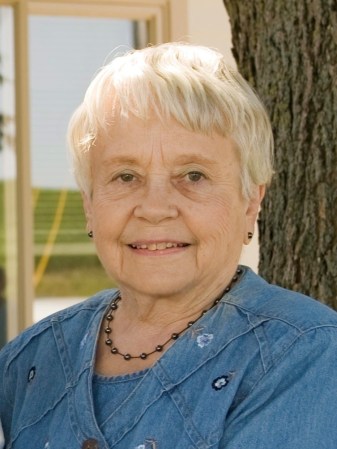 Marian C. Haddorff, 90, formerly of Austin, passed away at 12:00 am Wednesday, November 11, 2020 at Kingsley Shores Reflections Memory Care in Lakeville. She had been battling Alzheimer’s for 20 years and had tested positive for COVID-19 three weeks prior to her death.

Marian was born on July 3, 1930, in Minneapolis, to Lester and Esther (Reneke) Scharmann. She graduated from Mound High in 1948 and later Northwestern Nursing School in Minneapolis.

Marian married her high school sweetheart, Oscar, at Mound’s Mount Olive Church on August 19, 1952. The couple moved to St. Charles, where Marian worked as a nurse for a private practice doctor. Marian, along with their sons Rob and Rick, moved back in with her parents in Mound while Oscar served overseas in the military. After Oscar returned, the two moved to Austin, where Marian became the Vision and Hearing Coordinator for Austin Public Schools.

The couple raised their family, which included two more children, Nancy and Mark, in Austin where they resided for 53 years. Marian was an active member of Our Savior’s Lutheran Church, faithfully attended family sporting and drama events over the years, and enjoyed numerous gatherings with their many friends in town.

Marian and Oscar moved to Lakeville to be nearer their family and help Marian manage her Alzheimer’s Disease. She was preceded in death by parents, Lester and Esther; sister and brother-in-law, Jean and George Slentz, and husband, Oscar.

Visitation will be held from 4:00 to 6:00 pm on Friday, June 18, 2021 at Clasen-Jordan Mortuary with a memorial service to follow at 6:00 pm with the Reverend Liz Erickson officiating. Interment will be at Fort Snelling National Cemetery.

Donations may be sent in Marian’s name to Alzheimer’s research at act.alz.org/donate