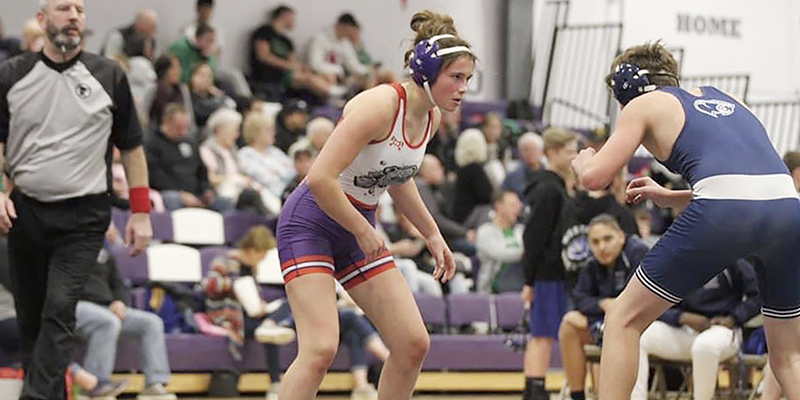 Diann Smith has wrestled with boys since she was a sixth grader. Photo Provided

GRAND MEADOW — Diann Smith isn’t afraid to get physical, and now she, and many other Minnesota girl wrestlers, will get the opportunity to chase the big stage in her sport of choice.

The Minnesota State High School League recently approved the addition of a girls wrestling postseason, set to begin in the 2021-2022 school year. That decision has girls like Diann, who is a freshman at Grand Meadow, smiling.

“I’m pretty excited to have our own state tournament,” Diann said. “It’s not really different, but there are advantages and disadvantages from wrestling boys instead of girls. We’re just built different than boys, I guess. It’s better to wrestle against girls. It’s never been on my mind that I could make it to state, because it was such a hard goal. It’s better now and I’ll have something to work for. I can get there.” 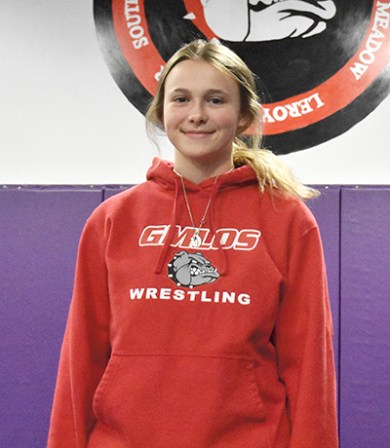 Grand Meadow freshman Diann Smith has been wrestling with boys since she was a sixth grader, but she now has a new goal in mind after the MSHSL recently passed a motion to bring postseason wrestling for girls. Rocky Hulne/sports@austindailyherald.com

Diann started practicing with the boys in third grade and she joined a team when they were short on wrestlers when she was in sixth grade. She wrestled for Grand Meadow/LeRoy-Ostrander/Kingsland/Southland this past winter, but had her season cut short when she was taken down and tore all of the ligaments and muscle in her elbow.

That injury caused her to miss out on her freestyle and Greco season and Diann will also miss out on softball this spring, but she’s not backing down from a sport that her big brother Daniel and her dad Randy both went to state in.

Diann wrestles for the Minnesota Storm, a team for girls based out of the Twin Cities, in the offseason and she’s part of a squad that took third in a national duals tournament in Oklahoma. She’s also won state titles in Freestyle and Greco four times and took fourth in a non-sanctioned state meet as a seventh grader, while going up against juniors and seniors.

Randy said that the time is right for girls wrestling to get their own state tournament as he’s seen the sport grow over the past few years. The GMLOKS program had three girl wrestlers in K-12 last year and 32 states have now sanctioned girls wrestling.

“Across the state, our numbers are continuing to grow through the Minnesota Storm and other offseason tournaments. It’s exciting to finally give the girls a chance to show what they can do,” Smith said. “The girls across the state are very competitive, it’s just when they get to the elite section meets, the boys are quite a bit stronger. It will be nice to have them finish their season at state.”

Diann also competes in competitive cheerleading and cross country, but she said the bond of girl wrestlers is a special one throughout Minnesota.

“I really like wrestling,” Diann said. “All of us are pretty close. We work together and we’re always wishing each other good luck when we see each other.”

Female wrestlers can now focus on competing at the next level as well as Augsburg University recently started a women’s wrestling program. Emily Shilson, a member of that team, is the daughter of Minnesota Storm coach Chad Shilson. She competed in three Minnesota State Wrestling Boys Tournaments when she was in Mounds View High School.

Chad said Emily is excited for the girls to have their turn for a state meet and thinks girls wrestling is headed in the right direction in Minnesota.

“We’re excited to see everybody come together for a state tournament to see who truly is number one. An event like this will attract all of the girls and all of the coaches,” Shilson said. “This is going to be the main event. It’s one more stepping stone in the long process of growing girls wrestling in Minnesota. This is a big one.”

Shilson said it will be great to see wrestlers from smaller towns across Minnesota take on wrestlers from the metro to see who is truly the best. He certainly expects Diann to be one of the contenders.

“Diann’s got a huge upside. She would be considered a middle upper weight,” Shilson said. “She’s strong and physical. She has a lot of the abilities that some of her opponents might not have and she’s very athletic. She’ll be in the mix.” 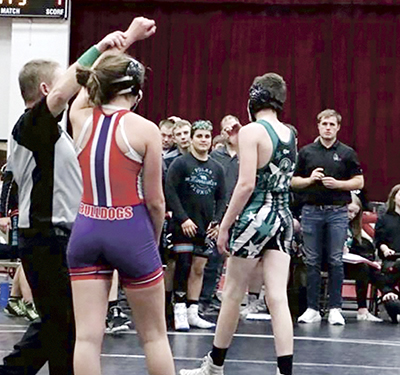 Diann Smith wins a match for GMLOKS this past season. Photo Provided

Girls wrestling has grown in Iowa

With Minnesota introducing a girls state wrestling tournament, you don’t have to look too far to get a glimpse of the future. It’s hard to find a better measuring stick for the future of girls wrestling in southeast Minnesota than the state of Iowa, where the sport has grown drastically in recent years.

In a span of five years,  Iowa has gone from 67 girl wrestlers to 683, according to an article in the Des Moines Register.

Theran Goodale is an Osage, Iowa grad who has wrestled at a high level throughout his life and he’s coached plenty of girl wrestlers in Iowa. He said he’s seen firsthand how girls have flocked to wrestling once they were given a big state meet.

“Iowa has seen an awesome reaction. The girls tournament has grown every year,” Goodale said. “It’s getting to the point where there are hundreds of girls. Iowa’s a little behind the ball from where the West Coast is and now Minnesota’s jumping on the train too. Hopefully the Midwest can all catch up at once.”

Wrestling is one of the few sports that has girls competing with boys on a regular basis. If a young girl in Minnesota wants to improve in wrestling now, she’ll have to do it by joining a boys team or practicing with boys.

“It’s really unique, because when they’re little, the girls tend to beat the crap out of the boys,” Goodale said. “Girls hit puberty first, they’re more bendable and they’re better oriented to wrestling at that age. Then when the guys hit puberty, the gap starts happening. Before high school, it’s really actually pretty close between boys and girls.”

Goodale, who had a record 158-32 at Osage before wrestling at Limestone University in South Carolina, thinks the best is yet to come for girls wrestling.