Back in the chase 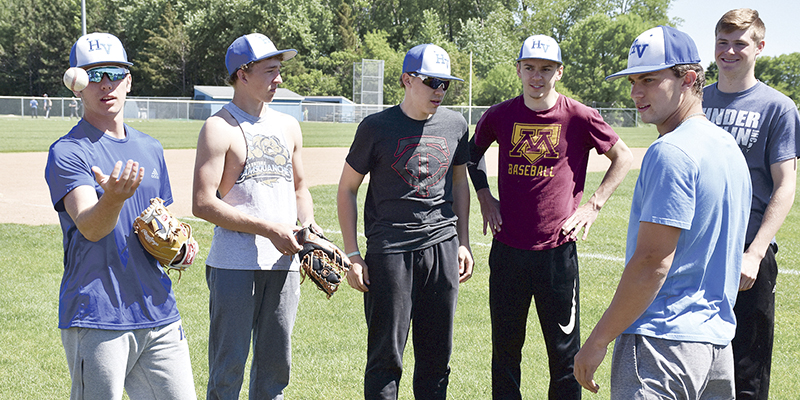 HAYFIELD — When the Hayfield boys basketball team was winning the Class A championship a couple of months ago, many of the team’s players already had their eyes on another historic goal.

The Vikings aren’t satisfied with just a big basketball run; they’re also chasing after the school’s first ever state baseball championship. They’ve shown some promise this season as they are currently the top ranked team in Class A with the postseason set to start next week.

The Hayfield baseball team is currently unbeaten and ranked No. 1 in the state. The Vikings have some big things ahead of them as the team opens Section 1A Tournament play this week. Rocky Hulne/sports@austindailyherald.com

“Even when we were in the state basketball tournament, baseball was in the back of our heads. We were excited for those practices. It was automatic for us. We missed baseball a lot,” Bungum said. “We’re staying confident (this spring) and we’re not getting too far ahead of ourselves. We know we’re undefeated, but every game we want to bring our best and give each team our best shot.”

The Vikings (18-0) have been downright unbeatable in their last 11 games, outscoring opponents 139-12 over that stretch. Hayfield pitchers have yielded just five runs in the last eight games.

Hayfield’s success has come from a pitching staff that has worked hard from the start. Hayfield’s hitters have also stepped up as the Vikings haven’t struck out more than their opponent all season long.

“Our pitching has been on point. We really haven’t been walking guys and we’re striking out a lot of guys. We’ve also been hitting the ball really well,” Hayfield senior first baseman Lucas Hansen said. “We’re still on a high from the state basketball championship. I think that’s carried over for us.”

While junior Easton Fritcher has put up big strikeout totals and senior Joey Tempel has had some dominant performances as well, senior Kael Becker has served as a steady hand on the mound for the Vikings as well. Becker didn’t see much varsity time when Hayfield advanced to its first ever state tournament in 2019, but he worked hard throughout the COVID-19 shutdown last spring to be ready for this season.

“We have a very talented group of pitchers and almost everyone on the team can pitch. It feels like we never really had a break,” Becker said. “We’ve been ready for it since last spring.”

Hayfield graduated a lot of talent from that 2019 team, but head coach Kasey Krekling knew that the Vikings would be back. The JV team in 2019 lost just two games and many of those players are now shining on the varsity level.

“We knew they would be talented and they showed great growth over the summer months. It starts with our pitching and defense,” Krekling said. “We have quick innings, we don’t make any errors and our pitchers throw strikes. We have three pitchers who throw very, very well.”

Krekling, a Hayfield grad  who pitched at the college level for Waldorf College, said this year’s team has stayed sharp, while also testing him at times. Krekling has been known to take the mound and sling a few fast balls at his starting lineup when he wants to push them.

“I love it, because I get to get on the mound and challenge them. Last week I got on the mound and pitched as well as I could and they liked that challenge,” Krekling said. “We want to push practice so it’s hopefully harder than it will ever be in a game. We want them to be ready for every situation and hopefully it feels easier in a game.”

Krekling has also received a big boost from Hayfield assistant coaches Cam Rutledge, who once played for Krekling, and Tom Dublin.

“Tom and Cam have done so much for us this year,” Krekling said.