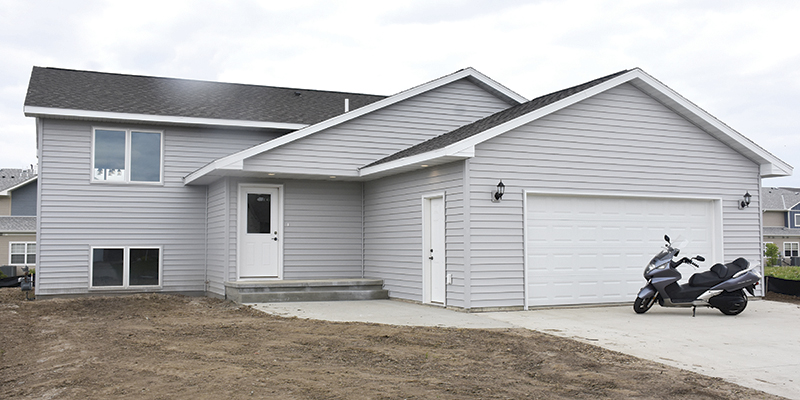 The house is located at 809 24th Ave. NW, built as a collaboration between RCC and the HRA, will be up for sale in June. Michael Stoll/mike.stoll@austindailyherald.com

A house built as a collaboration between the Riverland Community College Carpentry and Electrical program and the Austin Housing Redevelopment Authority will soon be on the market.

“For many years, Riverland has built a house through the carpentry program and they have worked the past four years with Habitat for Humanity, which is no longer in our community,” said HRA Director Taggert Medgaarden. “We thought it would be good to partner with Riverland to get housing on these lots.”

HRA Director Taggert Medgaarden points out one of the four bedrooms in the RCC/HRA house.
Michael Stoll/mike.stoll@austindailyherald.com

The house was built on one of nine lots the HRA owns in the area. The goal is to have the house on the market by mid to late June. The price and purchasing stipulations will be determined by the HRA Board of Directors.

“The big topic is housing these days and Riverland needed a project, so we thought it was a perfect fit for us to collaborate,” Medgaarden said. “They built it and hopefully we’ll have it for sale this summer.”

RCC students who worked on the project found themselves doing so with the challenges of the COVID-19 pandemic. RCC Carpentry instructor Walt Alms, who oversaw the project along with fellow instructor Adam Hahn, said the students were fortunate.

“Students had to wear masks and instructors had to wear masks, but for the most part it was outside, so that helped,” he said. “I had a total of three students over the course of the year that were quarantined for a short period of time, but nobody that I’m aware of had COVID-19 during the build.”

Alms and Medgaarden both expressed hope that RCC and the HRA could continue in this collaborative effort as time goes on.

“It’s been a wonderful collaboration between Riverland and the HRA in the fact that we needed a house-build project for the students to work on and HRA had the lots and the interest in creating homes,” Alms said. “It really was a perfect fit for us. It looks like, and we’re hoping, that we can continue this next year and for many years after to hopefully fill up a few of these lots out here.”

“Ultimately (a continued partnership) is a board decision, but it’s something we’re definitely going to try to continue on with board approval,” Medgaarden said. “This has been great to work with (RCC) and I think it’s a great partnership we want to maintain.”