Vikings are united and relaxed headed into state title showdown 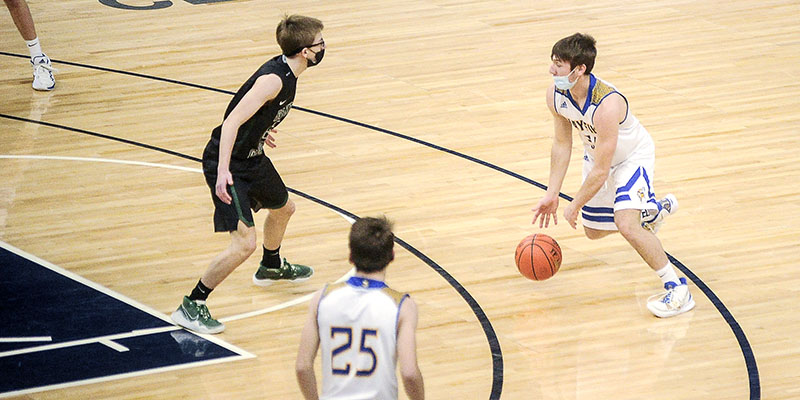 HAYFIELD — The Hayfield boys basketball team is hoping to put together the ultimate closing act to a wild year when it squares off against Hancock in the Minnesota Class A state championship in Target Center in Minneapolis at 1 p.m. Saturday.

While Hayfield senior Ethan Slaathaug has drawn the spotlight throughout the team’s run through the postseason, it is the entire Viking roster that has put the team in place to play in the biggest game of the year.

“For most of the year we just dressed ten guys and that makes it five on five in practice. All ten guys have been key parts at different times of the year,” Hayfield head coach Chris Pack said. “There have been games where every guy has played a key role at one time or another. They push each other in practice and they get after it, but by the time they get to the locker room they’re best friends again. That kind of competition breeds success.”

While Hayfield has relied on it’s ‘Iron Five’ through much of the postseason, the team has a bond that runs deeper than the surface reveals.

Most of the squad has been friends since elementary school and every player on the roster has embraced their role — whether it be in the starting lineup or on the bench.

Hayfield senior Erik Bungum was able to score in the late minutes of Hayfield’s 79-53 win over Badger/Greenbush-Middle River in the semifinals, but his varsity minutes have been few and far between.

“We had a really good JV season and then our roles changed once the tournament started,” Bungum said. “Now we’re just accepting our roles in practice to make the starters better. Sometimes it can get a little bit toxic, but it’s all love and it makes us better in the end.”

Heartbreak ran rampant in Hayfield last spring. First, the Hayfield boys basketball team lost the Section 1A title game to Highway 30 rival Blooming Prairie and then the Hayfield baseball team saw its season cancelled due to COVID-19 protocols. The Vikings had gone to their first ever state tournament in the spring of 2019 and they were expecting to be contenders in 2020.

“We would’ve had a really good team and a really good season,” said Bungum. “It was unfortunate that we weren’t able to see what we could’ve done. It did bring us together closer in some ways.”

Bungum and the Vikings stayed together throughout the summer as most of the team played in the Hayfield’s annual wiffle ball tournament and many players stayed active with organized shootarounds and pick-up games.

The team is now embracing an opportunity like no other. For Bungum, the youngest of four children, it could mean gaining some bragging rights over his older siblings Evan, Johanna, and Brooke.

“It means a lot to me that I can show my older brothers and sisters that can do it too. I’m able to contribute to a team that’s about to play in a state championship and that’s a big deal,” Bungum said. “It’s a great opportunity. I’m stoked and it’s very exciting to have an opportunity to win state. It’s a big deal.”

If the Vikings want to make school history, they’ll have to get past Hancock (19-5 overall). The Owls are in their first state tournament since 2003 and they have a tough matchup for Hayfield in big man Matt Thompson, who had 20 points, 19 rebounds and three blocks in the Owls’ 65-53 win over Sleepy Eye/Saint Mary’s.

Pack has a lot of respect for Hancock, but he thinks the Vikings have a good shot.

“There is a sense of confidence where if we play our style and shoot the ball the way we’ve been shooting it, we’re going to be tough to beat,” Pack said. “This will be a challenge, but we’re confident that we’re playing our best basketball.”

The return to the state title game has been a little bit of a flashback for Pack, who also coached the Vikings to a state title game in his first year as a head coach in 2001. Those Vikings went 23-6 overall and they finished as the runner up in Class AA.

“It’s surreal. No one ever expects to get back,” Pack said. “It’s such a rare thing, even though it is always the goal. It brings back a lot of great memories and I’m certainly happy that our kids get to experience it this year.”

“The support of our community has been great. So many people have been stepping up and feeding them meals,” Pack said. “With the welcome homes and the send offs they’ve given us, have made it a great experience.”

Slaathaug scorches Gators, Vikings move within one win of…