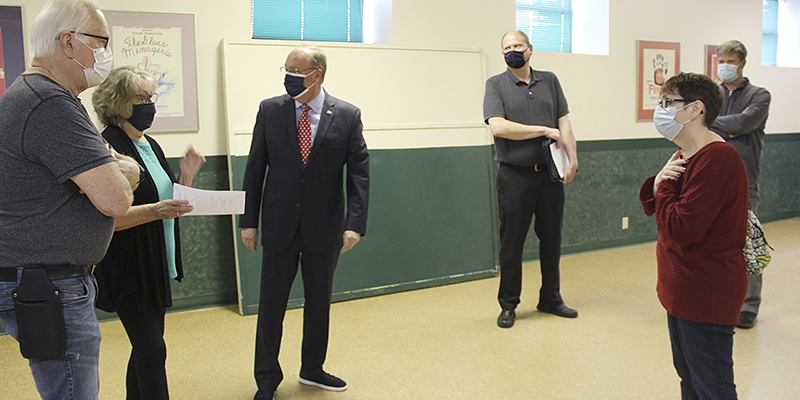 Representatives of Albert Lea Community Theatre and the city of Albert Lea stressed the value of the Marion Ross Performing Arts Center in the community Wednesday during a visit with 1st District U.S. House Rep. Jim Hagedorn.

Neil Lang, who manages the Performing Arts Center, said before the COVID-19 pandemic, the building housed four plays a year through Albert Lea Community Theatre, as well as rehearsals and several other concerts and events throughout the year, including regular live-streamed performances of The Metropolitan Opera.

Lang and others took Hagedorn on a tour of the theater, which is owned by the city and managed by ACT. The theater has been closed since the start of the pandemic because of safety restrictions for plays and other productions.

Elizabeth Harty, the ACT treasurer, said the organization was not able to finish two of the four plays in the last season but they hope to do the two plays next year that had to be postponed, along with the new season.

Each play typically has over 2,000 attendees, of which 500 are season tickets.

Hagedorn’s visit came a day before the application period opened for the Shuttered Venue Operators Grant through the U.S. Small Business Administration, which will provide more than $16.2 billion in economic relief for operators of live venues, live performing arts organizations, museums and movie theaters, as well as live venue promoters, theatrical producers and talent representatives.

The entities were some of the first that had to close their doors last year at the onset of the pandemic, and many have not reopened or have only been able to open at limited capacity.

The funds for the grant program were appropriated in the American Rescue Plan Act that passed in December.

Hagedorn, R-Blue Earth, who voted for the program, said there are few entertainment places like Albert Lea’s theater in southern Minnesota, and he wants to do everything he can to help these venues pull through the pandemic, despite the closures and loss of revenue.

“We know what it would mean if the city were to lose something like this,” Hagedorn said, noting that amenities such as theaters attract people to communities.

“We know that for the stage and venue operators across the nation that help make this culture happen, the pandemic has been devastating,,” she said. “Too many have been forced to lower the final curtain on their businesses.”

Albert Lea City Manager Ian Rigg said people nowadays are looking for places they want to live because many do not have to live where they work. Because of this, it is important to have things that contribute to a high quality of life, he said.

Harty said she had lived in the Cities for 20 years and moved back to Albert Lea when she was given the opportunity to telework for her job. She said Albert Lea Community Theatre is one of the things she loves about the community.

She said ACT hopes to launch ticket sales during the unveiling in July of the new Marion Ross statue that is being installed in front of the theater and that has been fundraised by a group of residents.

Learn to fly with EAA