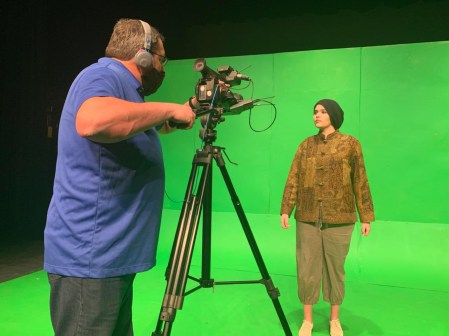 Riverland Theatre Technical Director John Deyo films actress Yasmin Bacelar de Souza, who portrays the character Rosalind, in front of a green screen at the Frank W. Bridges Theatre for a scene in “As You Like It.” Photo provided.

Riverland Community College Theatre continues its 2020-2021 season with a musical adaptation of William Shakespeare’s “As You Like It,” which will be pre-recorded and available as a video on demand from April 30 through May 8.

The show, which includes music and lyrics by Shaina Taub and Laurie Woolery, is a tale of faithful friends, feuding families, and lovers in disguise. Forced from their homes, Orlando, Duke Senior, his daughter Rosalind and niece Celia escape to the Forest of Arden, a fantastical place of transformation where the refugees find community and acceptance under the stars.

“As You Like It” was originally scheduled to be performed in the Spring of 2020, but after one week of rehearsals, the COVID-19 pandemic forced the closure of the Riverland campus, thus causing the show to be postponed.

“It was disappointing because we’d already done so much work on the production and were so excited to start bringing it to life,” said director Lindsey Duoos Williams. “Even though our 2021 version will look very different than what we originally intended, we were able to keep much of the same cast together and finally get to share the work we started over a year ago.”

In Fall 2020, Riverland Theatre did a live online production of “She Kills Monsters.” But as Williams and technical director John Deyo soon discovered, doing a musical live while keeping everyone socially distanced is impossible.

“After about a week of rehearsing on Zoom, it was realized that you can’t rehearse music on Zoom,” Deyo said. “The timing is too weird; by the time it gets from your house to my house, it’s different by about half a second and you can’t sing together. We started bringing the rest of the cast in here, masked and separated all throughout the audience, and we worked on music that way until everybody had a good understanding of the music part of it. Then they would schedule individual appointments with the music director and she would work with them.

One or two numbers had choreography, so we would bring those cast members in and work on the dance, then we would record that and they could study it in the safety of their home. No one was really together for that long or close.”

Cast members were then individually fitted for their costumes, then scheduled a time to film with Deyo in front of a green screen at the Frank W. Bridges Theatre. For Deyo, who owns Videyo Arts and has prior experience with TV video production, doing it for theater was a new endeavor.

“One by one, we recorded (cast members) and sent them on their way with the promise of ‘we think we’re done with you, but we can’t guarantee and we may need to call you back in,’” he said. “That didn’t happen too much.”

During the filming, cast members would sing along with a piano track that was recorded earlier on.

“There had to be a consistency to what they rehearsed with, what they performed with to what I’m going to lay underneath all of the stuff in the video,” Deyo said. “That all had to be the same.”

The amount of time it took to record each cast member varied by how often their character appears in the show.

“I was left with 33 hours of footage to disseminate through and figure out how to turn this into a 90 minute show,” Deyo said. “It’s been quite a challenge just to get it into the right scene. I’ve been editing like a crazy person for two weeks now and I have until Friday to get this finished.”

Individual tickets to “As You Like It” are $16 per viewer, with a “Group Viewing” pass available for $35 for groups of three or more. Tickets are currently on sale at www.riverland.edu/tickets. All ticket sales will be handled by phone or internet for this production and the on campus box office will not be open for in person sales. Riverland students receive a free ticket (good for up to two viewers) with a valid student ID. Contact the box office at 507-433-0595 or by emailing boxoffice@riverland.edu.

After purchasing tickets, audience members will receive a code that will allow them to access the recording for 48 hours.

“As You Like It” is appropriate for all ages.

“The show seems even more relevant now than it did a year ago,” Williams said. “This is a story that is centered around the importance of community, reminding us to continue to love each other even through the darkest times in our lives. This past year, our theatre community in particular has felt the disconnect of not being able to gather together to rehearse and perform, so it’s a comfort knowing that better times lie ahead.”