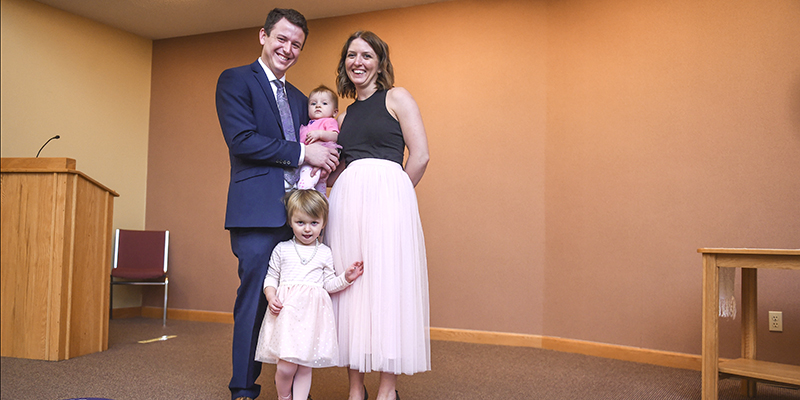 Tyler and Emily Hoff and their children Haddie (3) and Kate (seven months) are the new owners of Worlein Funeral Home. Eric Johnson/photodesk@austindailyherald.com

Timing is everything and for Paul Worlein and Tyler Hoff, the timing of their situation couldn’t have been better.

Hoff has recently taken over ownership of Worlein Funeral Home and Worlein Blooming Prairie Funeral Home from Worlein at a Nexus of perfect timing.

Hoff himself comes from a family of funeral directors, starting with his grandfather, Lowell Hoff, in 1969 with the starting of Hoff Funeral and Cremation Service. As more families became involved in the family business, it expanded to five locations.

For Hoff, like Worlein, timing couldn’t have been better.

“When we found out about the opportunity, it wasn’t like we were looking to break away from the family business,” he said. “It kind of came up and we talked between us and talked with my parents and sister as well. This makes sense. Austin is a wonderful community and it all just kind of fell into place for us.”

By “us,” Hoff is referring to his family, including wife Emily and their daughters Haddie (3) and Kate (seven months).

Worlein Funeral Home was founded by Ward O. Worlein, who was a returning serviceman; however, the heritage of funeral service began in Waterville, Minnesota, with Ward’s grandfather and father and continued with his son’s John and Paul.

Not long after being established, a funeral home in Lyle was acquired and in 1990 the Blooming Prairie site was added. 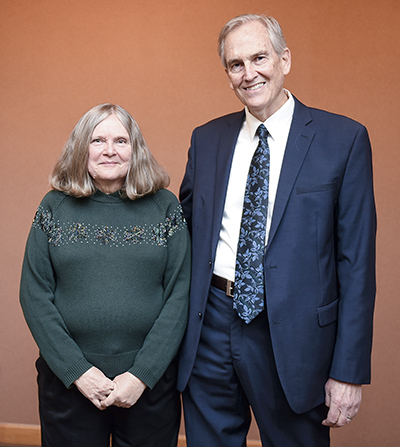 Like Paul, Hoff was introduced early to the funeral service.

“Since the time I could put on a suit I was helping my parents at the funeral home,” he recalled

However, when a childhood friend passed away while he was still in school, Hoff knew he had found his calling. The moment still has a profound effect on him today.

“When she passed away, I saw how my parents came to the school and really helped the community,” Hoff remembered. “It wasn’t just a job. It was meaningful to everyone.”

That experience and that desire to help families through their darkest time continues to have a deep effect on both Hoff and Worlein. Both see funeral homes as and their functions as a centering service during a time of loss.

“It’s a center of showing each other affection and compassion,” Hoff said. “We’re here because we care — anything we can do to make that worst day a little bit easier.”

Even though both sides saw the benefits of the timing, it would be easy to raise an eyebrow as to the timing during a pandemic. But as Hoff looks at it, there couldn’t be a better base to start from then the long and trusted tradition the Worlein family has laid.

“You would have to be blind not to think about the factors of pandemic,” Hoff said. “This is a long-established tradition Paul’s family has built here. A couple bad years in a pandemic isn’t going to shape our future. It’s something we’re going to come out on top of.”

Paul agrees as he looks back through the history of the funeral home.

“We talk about funeral service; historically, we’ve always come to the aid of people in really bad times,” he said. “Obviously, one person’s loss is the one of the biggest things in their life. That’s kind of what we do as funeral directors.”

As Hoff takes the reins of this storied Austin business, he doesn’t foresee much in the way the business runs. However, the business will continue to meet the changes of the industry as they are happening, something Paul has seen in his over 20 years as director of Worlein. The difference is those changes come much more quickly.

“It’s evolved,” Paul admitted. “The changes have always taken place, but things are changing at a much more rapid pace.”

“We’re still dealing with people and that hasn’t changed,” he continued. “People are looking for us in a service and what we can do is help them get what they want.”

Hoff sees a future of technology in this adjustment, but at the core will always be that interaction.

“There’s hundreds of ways to memorialize someone,” Hoff said. “That’s going to continue to evolve in front of our eyes. Technology is great and it can help us a lot, but it doesn’t get rid of that human aspect we crave.”

As Paul moves forward, his work will continue, with plans to spend some time on the road with his wife.

“I’m going to continue doing the things I’ve been doing the last nine or 10 years,” Paul said. “Joanne and I of course will spend all the time we can with our families. We’ll just continue to do more of that.”

For Hoff, the future will continue the same excellence as people have come to expect.

“My goals are to be a part of the community,” he said. “Try and support the community and I know they’ll support us back. Paul has done such a good thing building what is here. My goal is just to continue the tradition that’s been here and try to live up to the expectations.”