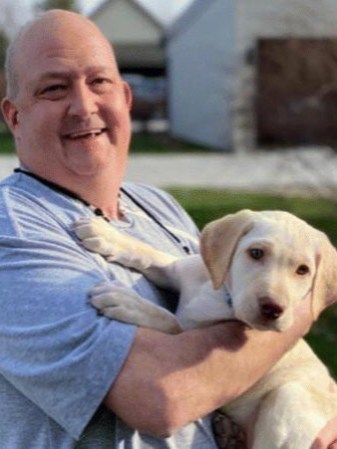 The gentle soul of Ryan Patrick Peterson became one with the Force and entered the Glorious Kingdom of our Heavenly Father on Wednesday, March 4th, 2021. Those honored to be present at vigil, during his passing, agree it was beautiful. As in life, during his transition, Ryan’s humble politeness and making sure his loved ones were “okay” remained to the very end.

Diagnosed with cancer and facing a shorter time than hoped for, Ryan was serene knowing that he had already accomplished what he treasured the most, raising his three beautiful children with his best friend. He often commented on how very lucky he was to be given the gift of this time. “The rest is gravy,” he would remark.

A man of astonishing strength, he protected those he loved fiercely. One of the greatest lessons he left his family with was the demonstration of grace and patience during stressful times. Collide one family car into another? “No worries,” Ryan would say, “it’s just stuff.” Family and friends appreciated him as a kind selfless coach, mentor, pharmacist, hockey lover, Star Wars superfan, Billy Joel enthusiast, skillful impressionist, Disney World honorary resident, Marvel Superhero, travel agent, chocolate chip cookie baker, Norwegian lefse and Yooper pasty connoisseur, and storyteller.

Ryan truly appreciated some of the simple things in life. He cherished his lake home, playing fetch off the dock with his labrador Banff, escorting his kids to school every morning with copilot Holly, hunting with family in Wykoff, and even caring for Dorothy, the family goldfish. A lover of God’s creation, Ryan traveled to some of the most memorable places, such as Banff, Canada, the Boundary Waters, and the Grand Canyon. However, he would trade it all for a night in front of a fire, eating some popcorn and sharing time with his family.

We have been blessed with tremendous care, support, love, and prayers throughout this journey. In lieu of a funeral, Ryan requested a private family gathering of celebration. In honor of a shared passion with his beloved grandmother, Lorraine, for supporting children with disabilities, the family requests that donations are made in Ryan’s name to http://www.zachariahsacres.org/donate/ (click on Tribute Gift).

Ryan lived his life in a way that the fear of death could never enter his heart. Ryan, you are so loved, we feel your presence and carry you with us… until we meet again. Quinn, it’s your turn with Daddy. “Death is a natural part of life. Rejoice for those around you who transform into the Force. Mourn them do not.” – Master Yoda