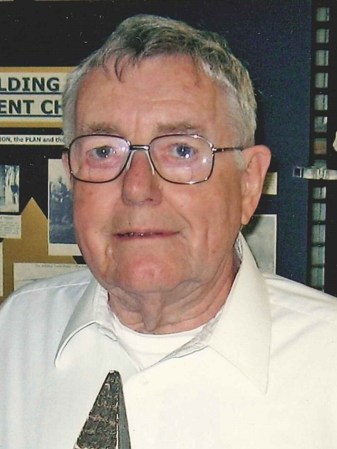 Ralph was born December 4, 1918 in Boise, Idaho to Ernest and Clara (Cooper) Nebergall. He graduated from Austin High School and attended Northwestern College in Minneapolis, Minnesota earning a Bachelor’s degree in the Seminarian program.

Ralph served in the Army during WWII as a truck driver, landing at Normandy Beaches with the 3rd Armored Division in July 1944 (three weeks after the June invasion). In the European campaign, Ralph helped liberate France and he participated in the conflicts in various German cities which helped bring the war to an end.

Ralph married Helen Vernelia Beadell on August 20th, 1948 at First Baptist Church in Austin, Minnesota.  He worked at Hormel in Austin, where he deboned hams for the “Cure 81” ham product line.

As a licensed minister, Ralph would do evangelical work across the 5-state area. As an artist, he would bring his gift of art to the congregations by drawing on his chalk easel while preaching as he drew. He was a member of Grace Baptist Church in Austin, which he helped build. He faithfully served as Deacon, Sunday School Superintendent, and many years as a Sunday school teacher.

Ralph helped with the North Star 4-H club for a few years when his children were involved and made many trips during the winter to take “teenagers” to watch their team play basketball.

Ralph is survived by his daughter: Joy (Steve) Payne of Roseville, Minnesota, son, James Nebergall of Texas; beloved nieces and nephews: Sue and Denny Henriksen of Waukesha, Wisconsin, John D. and Bonnie Hillmer of Waukesha, Wisconsin, Sandy and Chip Hungerford of Spring Creek, Pennsylvania, and Penny and John Quirk of Steven’s Point, Wisconsin; And the many loved great nieces and nephews; dear friends, Dave and Becky Pearson of Austin, Minnesota and children and their children who were “Ralph’s Grandkids”.

Funeral services will be held at 1:30 pm on Saturday, March 27th at Grace Baptist Church in Austin with Pastor Dan Mielke officiating. Visitation will be at the church one hour before the service. Interment will be at Oakwood Cemetery with Austin Post #91 American Legion in charge of military rites.