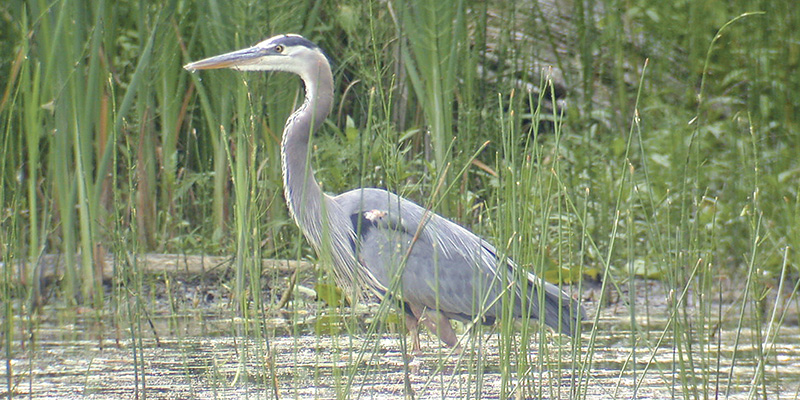 Ahh, March. A month that can be tricky to predict, but can hold a lot of potential. March can be a continuation of winter, an arrival of early spring, or an eclectic mix of the two.

While a lot is uncertain in March, there are some things we can count on. We can count on Canada Geese nesting -— preparing for warmer weather, melted snow, and the chance to lay their eggs. We can count on the best sap flows of the year, right as the maple trees begin to thaw. We can certainly count on uncertainty (which sounds a little too “2020-esque” for my taste). But my personal favorite March event is the return of blue herons. As a native New Englander growing up near an estuary, blue herons so fondly remind me of the start of warmer days.

Great blue herons are the largest and tallest of all North American herons. At four feet tall and only 5-6 pounds (thanks to their hollow bones – a trait that all birds have evolved for flight), these birds are certainly a sight to see. Blue herons have a wingspan of about six feet, and can cruise at a high speed of 20-30 mph. They are often distinguished in the sky by their long bodies and the “S” shape that their neck forms.

These funky little birds live off of a diet mostly of fish, and have a pretty neat way of getting it. Blue herons will stand eerily still in shallow water, and wait for a snack to swim nearby. When their meal is close enough, they throw their head and neck forward with such speed and precision that they can use their knife-like beaks to kill their prey – this style of hunting has been aptly named the “bill stab”.

While a vast majority of their food is caught with this method, they are certainly not limited to the “bill stab” blue herons can pluck prey off of the surface of the water with their feet, swim through deeper waters in search of food, pick up dead fish floating on the water’s surface, and even catch fish as they leap out of the water. Sometimes, they bite off more than they can chew… quite literally. They’ve been known to choke and sometimes die as a result of attempting to eat something bigger than they can handle.

Fish aren’t the only prey of blue herons. They also eat various insects, amphibians, reptiles, small mammals, rodents, and small birds. Some even forage near people to collect food scraps – I guess you could say they’re the lanky, amphibious raccoons of the bird world. Or a very silly looking cousin of seagulls. I think that they kind of look like sharp, grey flamingos with a comb-over, though, that’s beside the point.

Blue herons winter in warmer climates, and their range is expanding from southern states to Central America. In spring, female blue herons return to their nesting sites, which are the same spots that they return to year after year. While they nest in the same spot annually, they mate with different partners. They nest in colonies called heronries, and build large nests in trees (about 3-4 feet across) of mostly sticks and twigs. Heronries can have upwards of 100 nests! When these communities have birds of mixed species, they’re called rookeries.

While March is one of the most unpredictable months of the year, it undeniably holds the hope of winter coming to a close. March signifies the beginning of brighter days ahead, and blue herons more than any other species fill me with the hope of sunshine and snowmelt.

• March at the Nature Center

•Sola Fide Free Public Viewing by reservation only. Secure your time by calling 507-437-7519, or messaging us on our social media. All Sola Fide nights are dependent on clear skies.