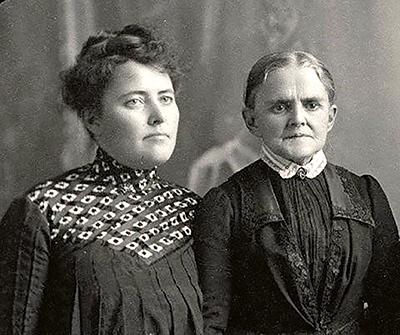 I sure wish Charlotte Hormel would have been at the Hormel Historic Home this week.  George’s younger sister, Charlotte, attended the Chicago Kindergarten College and I could have used her help as we welcomed our first Woodson Critters for field trips.  We had great HHH volunteers and partners from Matchbox Children’s Theater, and the Woodson teachers are fantastic! I just think Charlotte would have also been a great help as we took the enthusiastic visitors on a historic shape hunt around the house museum and peace garden.

This is our fourth year being able to offer these experiences thanks to the financial support of the Austin Area Foundation.  We will welcome all the Woodson Critters and the Banfield first graders this year and will hopefully lay the foundation for a next generation of history lovers.

Lillian Hormel’s mother, Jane Gleason, was highly regarded as evidenced by words from her obituary in 1911:

“Her life speaks to us of ripened Christian experience, born of hope and faith and trust. She looked for good in every one, passed over their imperfections and if she found evil rebuked it so gently that the most sensitive could not take offense.”

A friend of Lillian’s wrote this of Mrs. Gleason:

“I know well that the memory of the gentle mind, the sweet helpful presence, the lovely kind face & the spotless example are ever before you and will be cherished by all who knew her.” Mrs. Gleason spent her later life living with her daughter and son-in-law here at the HHH, and it sounds like the couple would have been blessed by her presence.

George gave credit to his mother, Susanna, for instilling in him many lessons that helped him succeed in life such as the value of doing things to the best of one’s ability and to do a chore properly the first time to avoid doing it again later.  She is described in her obituary as one with a “a strong mentality, a clear, keen insight” and was one from whom her children always sought counsel.  As a resident of Austin for 15 years, she became invested in the community, especially the Presbyterian Church. “She brought to her church what she brought to her home, devotion and faithful service.”

It’s interesting to think of George Hormel as a son-in-law and as a young boy doing chores vs. a prominent businessman. He was fortunate to have so many strong, supportive, smart women around him in his life.

Presented by Paul Spyhalski in person

Free for members of the HHH, Mower County Historical Society and Friends of the Library.  $5 for non-members.