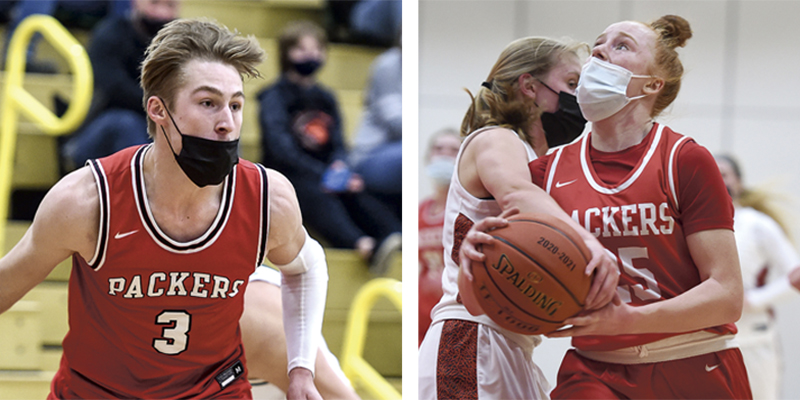 The Austin boys and girls basketball teams both have the unique opportunity the next two nights to clinch trips to the Minnesota State Basketball Tournament on their home court. The girls play Wednesday against Albert Lea at 7 p.m. and the boys host Byron Thursday at 7 p.m. Herald file photos

If you wait long enough, history will repeat itself, but sometimes the wait is shorter than anticipated.

The Austin boys and girls basketball team made school history when they each advanced to their respective state tournaments in 2019, and now the Packers are hoping to accomplish that feat again as a strange season presents another odd twist.

Austin head coach Kris Fadness said the basketball boom is celebrated by all in the community.

“We are Austin. We’re very happy for each other’s success. I would like to believe that our guys are their biggest fans and the girls definitely supported us. I’ve had some of those girls in class and they’re good gals. We want to see them do well,” Fadness said. “We’re also very happy for Logan Kelly and the swimmers who made it to state and we’re excited for the dance team and their second place finish. It’s a school pride thing and a community pride thing.”

Austin head girls basketball coach Eric Zoske is also excited about the success of all Austin teams and he’s certainly learned a thing or two from Fadness.

“It makes me happy to see our kids have success in whichever sport they play. Fads has been great for me and helped guide me through some things in my four years here at Austin,” Zoske said. “We met a couple of times last spring and summer and had some great conversation and film sessions. I look forward to learning more from one of the greatest coaches around.”

The Packer boys have won 12 in a row and they hold a record of 17-2 overall and the Packer girls are 10-4 overall, but they lost to AL 45-39 on March 8 after Austin underwent a two-week quarantine without practice.

“AL outplayed us last time we met up and we came home with a loss,” Zoske said. “Taya Jeffery is one of the top players in the conference and we need to guard her better than the previous two games. It’s a rivalry that runs deep and seeing AL in the section final should be a lot of fun for both towns.”

The Packer boys missed out on a Section 1A title game last year due to the pandemic, and they, like every other team in the state, have had to make drastic changes due to COVID-19 protocols. Masks, limited spectators and social distancing have become the norm, but the players have still come out with energy and effort every time they take the floor.

“It hasn’t been a lot of fun dealing with the COVID stuff, but the reality is that being in the gym with the kids has been a blast. I’m really proud of how the kids have handled it and they’ve shown a lot of maturity. It’s been a special season for our kids, especially for our seniors,” Fadness said. “All five of our seniors are everyday guys. They work hard on a consistent basis. They’re not whiners or complainers and they just go out and work and play to whatever their role is. They do everything a coach can ask of a player. We’re a smart team and a hard working team on the floor. I don’t think this is one of the most talented teams we’ve had in the last 15 years, but our work ethic and our smarts make up for the things that we don’t have.”

With a season not even certain until early December, it’s been a wild ride for all of the Packers this winter. Although nothing was guaranteed, many of the players stayed in shape and stayed focused. The attitude both teams showed in the dark days is now helping them shine when it counts most.

“What has the year been like in general with all of the COVID protocols and how has the team been able to maintain success under the conditions?

This season has been a roller coaster of emotion. But just having the opportunity to play this year is worth all the adjusting,” Zoske said. “Last summer was a real test of mental strength. We were cut short in our open gyms, didn’t have weights and were unsure if a season would even be possible. Even though we didn’t know if a season would be played, the girls did everything that they possibly could to prepare themselves. This season was cut by 50 percent, but I am very grateful to have had the opportunity to play.”