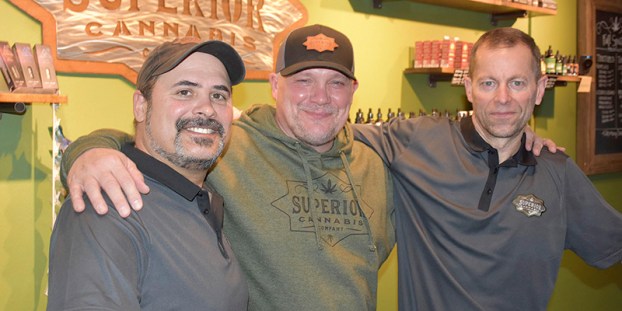 From left, Superior Cannabis owners Tom Cotter, Jeff Brinkman and Marty Tebay have built up a market for hemp use as medicine in Austin over the past three years. Rocky Hulne/sports@austindailyherald.com

Wrestling brought Jeff Brinkman, Tom Cotter and Marty Tebay together, but hemp has made them business partners.

The three Austin men have all made a big career adjustment in the past three years as they’ve taken to growing hemp and selling it in their store Superior Cannabis, which has locations in Austin and Canal Park in Duluth. The trio have taken to growing and selling hemp products for medicine of the body and mind.

Ever since the 1960s, there has been a stereotype of hemp and marijuana being harmful, but Cotter, Tebay and Brinkman are trying to smash that image. 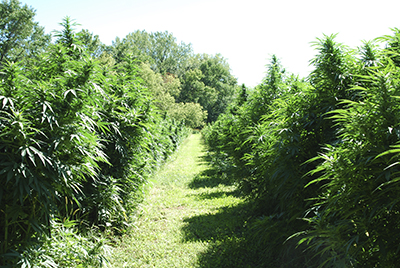 “The Native Americans used that stuff and they knew way more than we ever did,” Cotter said. “A life in balance is so important. It’s good to do stuff, but just don’t overdo it. That’s what gave marijuana a bad name, is that people would over do it.”

Farming hemp has been a trial and error process, but besides the testing for legality, it compares to any other crop. Tebay said that there is a big learning curve to growing the plant, but it is worth it to have a local product.

“Healthy soil makes healthy plants and healthy plants make healthy people. That’s true about anything. It’s not just hemp or marijuana, it’s all the way through the food system. We’re just part of the puzzle,” Tebay said. “Our focus was to help people. We knew there would be a lot of bad actors in the business and we wanted to be something that stood apart from that.”

The process of planting hemp for the owners of Superior Cannabis began in 2019 and the process has changed each summer. The first year, they used a small clone plant which they purchased and put in the field, the second year they planted seeds in pots and moved them out into the field. 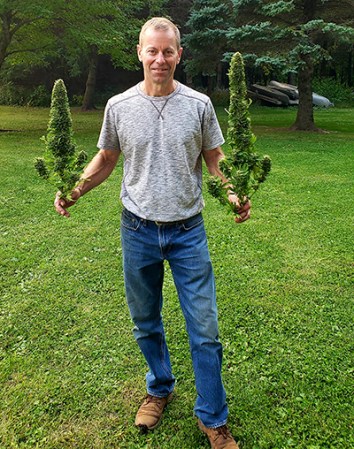 Marty Tebay is pictured with a pair of juvenile hemp plants. Photo provided

Superior Cannabis had a total of 54 employees helping out with last year’s planting season.

“You pick up bits and pieces of information out there that save you a lot of headaches and a lot of labor,” Brinkman said.

It was Brinkman who concocted the idea of a hemp business and the notion came to him as he crossed the bridge from Superior to Duluth on his birthday in 2018. He was listening to the radio and he heard talk of a federal farm bill legalizing hemp.

“I’d known these guys forever and I knew that Tom was a regenerative and organic farmer and Marty grew the best tomatoes I ever had,” Brinkman said. “That was on my mind while I went across the bridge. I told my wife that I really wanted to grow cannabis with Marty and Tom and she said ‘OK, honey.’ When they say that, you just take it and go.”

All three owners use hemp products themselves as Cotter needed help recovering from a broken leg and Tebay and Brinkman use it for anxiety.

If marijuana is legalized in Minnesota, the company is ready to move forward in that arena as well.

One big advantage of being a smaller company is they know exactly where and how the crops are grown, which means they can guarantee healthy plants.

Growing hemp has grown into a family affair. Photo provided

“Hemp farmers are absolutely the most giving people. Regenerative and organic farming are giving people, but conventional farming is not like that. It’s a little more cutthroat. It’s nice to jump into this area, where anyone we call will help us out,” Cotter said. “There’s so much information out there and all of our fields are different. It’s pretty neat to work it out. We have a great group of people to help out and when you’re having fun, it’s hardly any work at all.”

Cotter was recently working the desk at Superior Cannabis when an elderly man with ALS came up with shakes. He told Cotter that Superior’s products are the only thing that can stop his shaking.

“How cool is that, where we’re doing something to make a difference?” Cotter said. “There’s not a lot of jobs where you can say that. It’s so fun to deal with the customers.”

PROGRESS 2021: For the patients

After months of waiting, Mayo and its patients are enjoying the new Family Birth Center   It seems like forever,... read more