Far away and tied to history 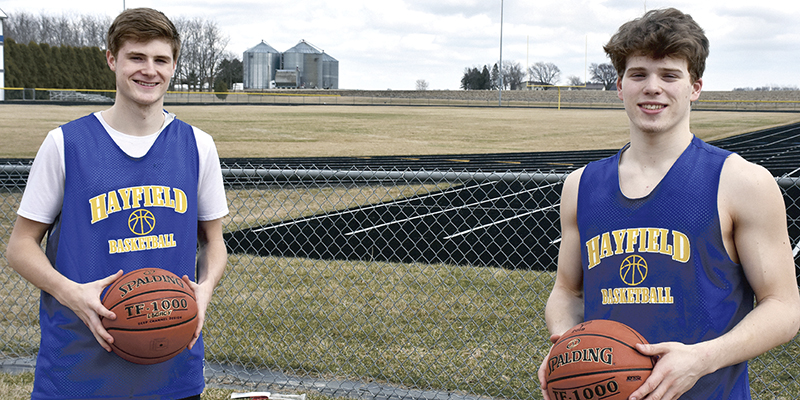 Ethan Slaathaug, left, and Isaac Matti have both stepped up for the Vikings this season. Slaathaug moved to Hayfield from Fulda four years ago and Matti’s grandpa, Doug, was an assistant coach for the state qualfiying Vikings 50 years ago. Rocky Hulne/sports@austindailyherald.com

Hayfield’s Slaathaug delivered as a new arrival, while Matti carries on a Viking tradition

HAYFIELD – It is just two days after the Viking boys basketball team clinched its first state berth in eight years and just a handful of days before that state tournament and practice is just wrapping up. Senior Ethan Slaathaug knocks down a three-pointer to end the intersquad scrimmage and the smack talk starts.

Players are going back and forth about how having Slaathaug is an unfair advantage and it’s too easy to win with him. Eventually the playful bickering turns into laughter and everyone is friends again.

That’s the way it is with this bunch; they go out and give it their all on the court and then they hang out for supper or watch a college basketball game together.

Slaathaug came to Hayfield as the son of Hayfield High School superintendent Gregg Slaathaug and he was thrust on the varsity team as a freshman due to a need for players.

“We knew Ethan was going to be a good player, but nobody knew that he would turn into this,” Hayfield head coach Chris Pack said. “He’s put a lot of work into it and he’s grown quite a bit.”

While Slaathaug has excelled as a newcomer to town, Hayfield sophomore Isaac Matti has taken his game to new heights this season as well. Matti is the grandson of Doug Matti, who was an assistant coach on the Hayfield teams that went to state back when Minnesota had just one Class back in 1968 and 1969. He went on to coach the Vikings for 16 seasons.

Pack is well aware of Hayfield’s history and he has done his fair share as well as he has coached the Vikings to state in 2013 and now 2021. Hayfield has a total of five state tournament appearances.

“I’ve heard a lot about those teams from Doug and from Ron Evjen, who used to be our superintendent,” Pack said. “It’s pretty neat to be able to have that perspective and Doug is a wealth of knowledge. He bleeds basketball and blue and gold.” 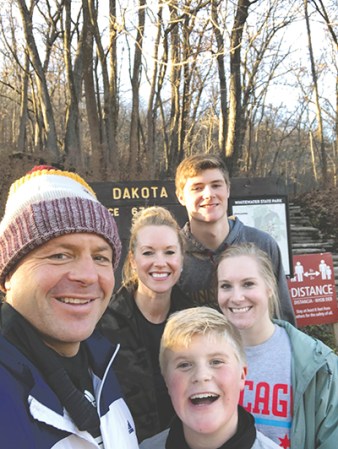 The Slaathaug family moved to Hayfield in 2017 when Gregg took over as the school’s superintentendent. Gregg and Tina have the three children — Ethan, Payton and Drew. Photo Provided

Ethan Slaathaug wasn’t always the unstoppable 6-foot, two-inch scoring guard that he is today. When he showed up to Hayfield, he was a five-foot, eight-inch kid who missed his best friends from Fulda, which is 170 miles west of Hayfield, while trying to blend in at a new school.

“At first it was a little weird, because some of the kids and teachers look at you like you’re the superintendent’s kid and you feel a little bit judged,” Ethan said. “You just want to be like everyone else and fit in. The last few years have been great. I’ve met a lot of people and it’s been fun.”

Being the superintendent’s son also has its benefits as Ethan always has the keys to the school when he wants to head to the gym for a shootaround. He also has the bonus of a dad who has basketball knowledge as Gregg coached the Fulda girls basketball team for 16 years – winning over 300 games, two state championships and four section championships. Gregg also coached Ethan in over 100 games between AAU and youth contests.

Gregg, who was a principal, athletic director and teacher at Fulda, also missed out on coaching his daughter Payton during her final years as a basketball player. That was tough, but it was also tough for him to say goodbye to Fulda – especially because Ethan’s two best friends were his teammates.

“The hardest day will always be the day that I had to tell Ethan’s two best friends that were leaving,” Gregg said. “They were boys I had coached since they were in third grade. That will hands down be the toughest day we ever had in the transition.”

Ethan keeps up with those Fulda friends by texting, but it was hard for him to leave for Hayfield, even though he knew it was best for his family.

“It was tough to tell my friends. I said  ‘I know we’ve grown up for the first 14 years of our lives, but I’m moving away now,’” Ethan said. “It was tough, but it was the right move for our family. I text those guys often and I keep in touch with them.”

Gregg, who is originally from Wilmot, South Dakota, said that Hayfield already feels like home after four years, especially after this crazy year of living through a pandemic.

“It was a really good chapter in our lives in Fulda and the last four years in Hayfield have been a phenomenal chapter. We feel like we’ve lived here a lot longer than four years. This is home. knowing we still have friends in Fulda, who we will cherish for the rest of our lives,” Gregg said. “This year has been stressful and it’s been hard on everyone. I think it’s a metaphor for life. Life throws things at you and you try to make the best of every situation. Our entire community, school board and kids have done a phenomenal job this year.” 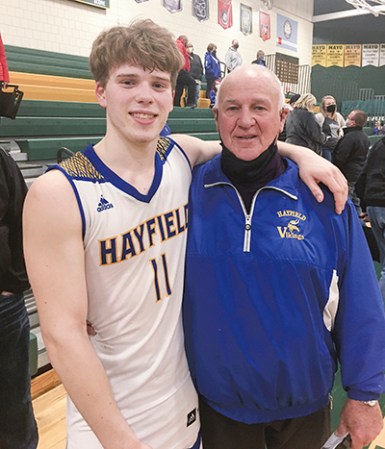 Hayfield’s Isaac Matti poses with his grandpa Doug after the Section 1A title game last week. Isaac helped the Vikings get to their fifth state tournament in school history and Doug was an assistant coach on the Hayfield boys teams that went to state in 1968 and 1969. Photo Provided

Doug Matti is used to his phone ringing at 5:30 a.m., and he always answers it. After all, not every grandpa has a grandson who wants to go to the gym with him and shoot some hoops.

“The Hayfield players have put a lot of hours into whatever is happening today,” Doug said. “There were many mornings in the last year where I would get a call at 5:30 in the morning and Isaac would ask if we could go out to Kramer’s Shed and shoot. Then he would go lift weights, he would go home and then get to school. That happened many, many times.”

Isaac has many motivations to get better. He wants to make up for the lost time of his older brother Nick, who tore his ACL twice and never had much of a chance to compete for the Vikings, he wants to get better to compliment Slaathaug and he also wants to add to the history his grandpa helped start at Hayfield.

Isaac has read up on the accomplishments of those Hayfield teams from the late 1960s from his grandpa’s press clippings and the book entitled ‘A Viking Miracle,’ that was written by Les Evjen.

“I saw that they beat Austin and I thought that was pretty sick,” Isaac said. “They had to go through the big schools like Minneapolis North. That would be really tough for us to do.”

Isaac is well known amongst a lot of the basketball old-timers in the area and they are all in his corner.

“A lot of my grandpa’s friends will text me after games and give me advice,” Isaac said. “They know me because they know him and it brings a lot of energy. My dad has also spent a lot of time in the gym with me.”

Doug considers himself ‘old school,’ which he also describes as ‘having common sense,’ and he is proud of what Isaac has done on and off the floor. As Isaac has made vast improvements from his work ethic, he has also kept it together in the classroom and the community.

“I’m super proud of Isaac. He’s a gentleman off the court, which I demand of any team I’m associated with and he’s got a fun team. We have a lot of them at our house and we feed them super noodles and snacks,” Doug said. “Isaac and I have  spent hours and hours together in the gym since he was in third grade. He’s reaping the profits of many hours. Ninty  percent of it was motivated by him.”

Doug said that today’s Vikings are just as competitive as the group he used to coach, but he has seen a change in high school sports over the years.

While some things have changed in Hayfield, others remain the same. For instance, those that don the blue and gold are going to give it their all and do it with class – just like the Vikings of the late 60s.