Fading moment: Blossoms say goodbye to an era in loss to Kingsland 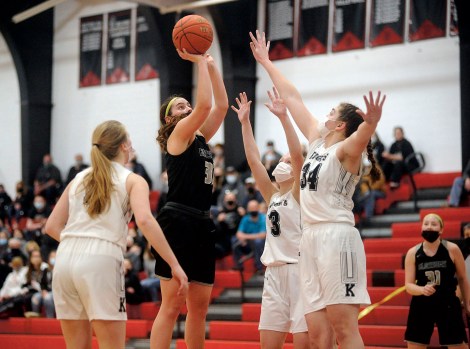 Blooming Prairie’s Megan Oswald is surronded by defenders as she pulls up for a shot against Kingsland in Rochester John Marshall Tuesday. Rocky Hulne/sports@austindailyherald.com 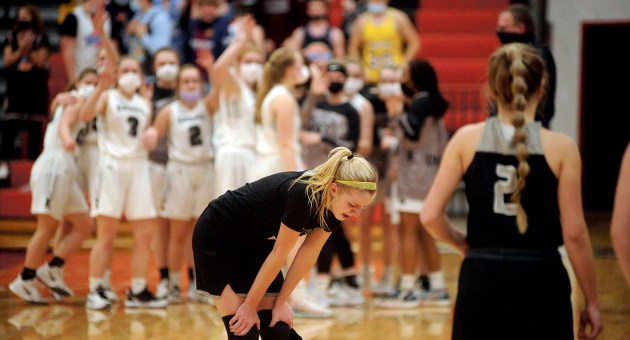 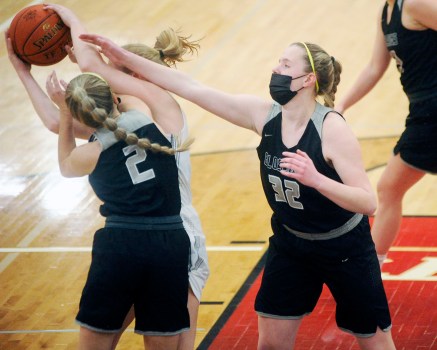 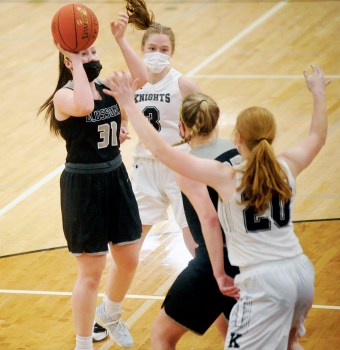 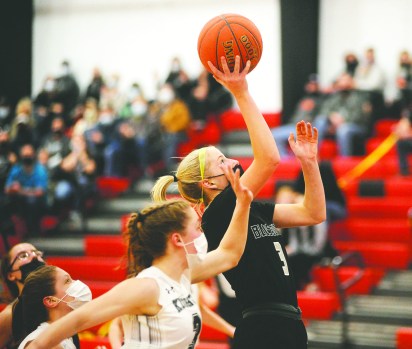 ROCHESTER — Not every postseason offers a shining moment, but the No. 2 Awesome Blossoms girls basketball team certainly took a moment to reflect after having its season slip away in a 44-39 loss to No. 3 Kingsland in the Section 1A semifinals at Rochester John Marshall Tuesday.

BP junior Bobbie Bruns converted a steal for a lay-up to bring her team within 35-32 with 5:15 left in the game, but Kingsland’s Ellie Buchholtz responded with a huge three-pointer to make it 38-32 with 2:55 left. The Awesome Blossoms (17-4 overall) never had another chance to tie or take the lead.

“Kingsland just battled with us until the end and we kind of ran out of gas a little bit. We had a couple of key turnovers towards the end and the ball just didn’t go in the hoop a lot for us tonight,” BP head coach John Bruns said. “That’s just what happens sometimes. We missed nine free throws in the first half and that came back to bite us.”

Kingsland (17-2 overall) ran out to a 9-4 lead in the first five minutes of the game and led by 11 at the half, but BP closed to within 27-26 when Allison Krohnberg hit a three-pointer with 10:35 left in the game. The Knights answered with a quick six-point burst in a span of two minutes to go up 33-26.

While the moment hurt on Tuesday night, the Awesome Blossoms have a lot to be proud of. In the last two seasons, the team has gone a combined 38-10 overall and it was one win away from its first state tournament appearance since 1999 in 2020.

John has two daughters on the team — Maggie, a senior who was out with an injury and Bobbie, who finished with 13 points, three rebounds, four assists and four steals — and  his niece Maren Forystek. It will be tough for him to say goodbye to this group.

“There are no words to describe this team,” John said. “I have two daughters and a niece on this team, but I almost feel like they’re all my daughters. We started in third and fourth grade and my wife and I coached them in traveling ball. I’ve coached them all the way up and it’s hard to see it end.”

Bobbie will be back next year, but the Awesome Blossoms will have a much different look with a bulk of seniors — including Jamestown commit and BP’s all-time leading scorer, rebounder and stealer Megan Oswald — moving on.

“It’s really special,” Bobbie said of her relationship with the seniors. “I don’t remember a time when I wasn’t playing basketball with all of them. It’s going to be different next year. I’m thankful for all of the time I’ve had playing with my sister, my cousin and my best friend. I’m just crushed to see it come to an end.”

Oswald had 17 points, nine rebounds and four steals in her final game for BP, even though she faced a lot of defensive pressure.

“We figured they would double down on Megan, because she’s Megan and she can score at will,” Bobbie said. “They’re quick and they get into the passing lanes. They did a really good job on the defensive boards and that made it tough. They’re a tough team.”