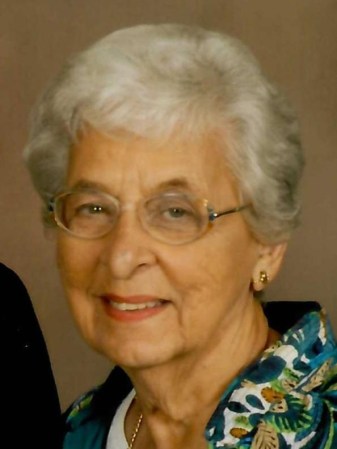 She was born June 29th, 1929 on a farm in Cherry Grove Township, Goodhue County, Minnesota to Edwin and Alma (Auseth) Bosshart. She grew up on her parents’ farm, attending country school until eighth grade when the family moved to Austin. She graduated from Austin High School in 1947 and Austin Junior College in 1949. Arlene was a secretary for Austin Public Schools for 24 years until her retirement in 1991. Arlene L. Bosshart married Benjamin J. Bednar on June 27, 1953 at St. Olaf Lutheran Church in Austin, Minnesota.

Arlene was a member of St. Olaf Lutheran Church. She served on many committees in the church including St. Olaf WELCA, St. Olaf Caring Ministry, was a Sunday school teacher for many years and served as funeral lunch chairperson.

She enjoyed volunteering and served on many boards and committees, including the Hormel Historic Home, Y Matrons, Austin Medical Center Auxiliary, Austin Artist Series, Sons of Norway and was a Girl Scout leader and an election judge for several years.

Arlene and Ben enjoyed traveling and attending their grandchildren’s sports and music activities.

She was preceded in death by her parents, Edwin and Alma Bosshart; husband, Ben Bednar in 2018 and many brothers-in-law and sisters-in-law.

Visitation will be held from 4:00-7:00 pm on Friday, March 12th, 2021 at Clasen-Jordan Mortuary. A private family funeral service will be held on Saturday. Interment will be in Oakwood Cemetery.

Masks, hand sanitizing, social distancing and all MN Department of Health COVID 19 protocols will be followed.