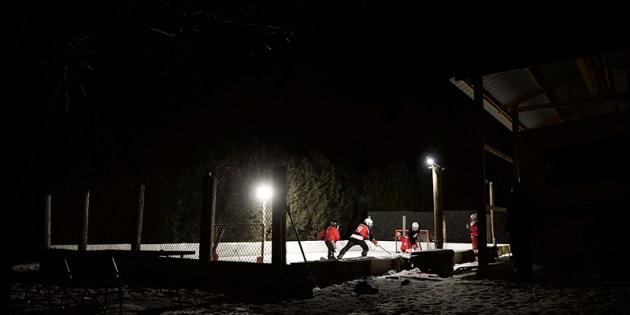 Outdoor rinks have been finding more and more popularity in the era of COVID-19. Eric Johnson/photodesk!@austindailyherald.com 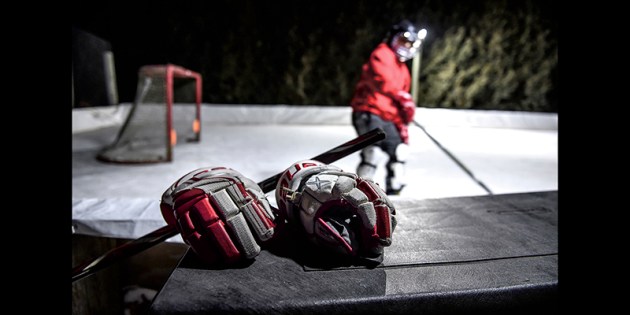 Gloves and a stick wait for their owners as hockey begins to pick up Friday night at the Overocker home, South of Austin. Eric Johnson/photodesk@austindailyherald.com 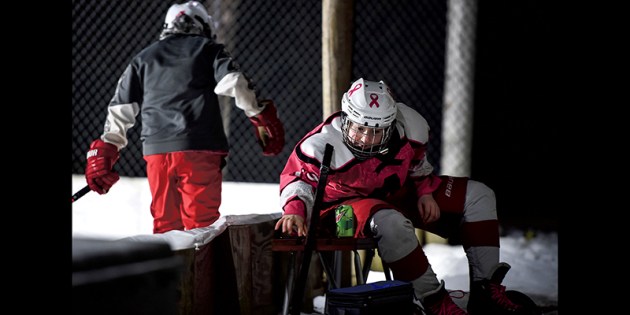 Lucas Kiker reaches for his stick after putting is skates on Friday night at an outdoor rink at the Overocker home. Eric Johnson/photodesk@austindailyherald.com

The puck is dropped on a game at the Overocker home south of Austin Friday night. As COVID-19 forced the closure of rinks, backyard rinks are becoming more popular. Photos by Eric Johnson/photodesk@austindailyherald.com 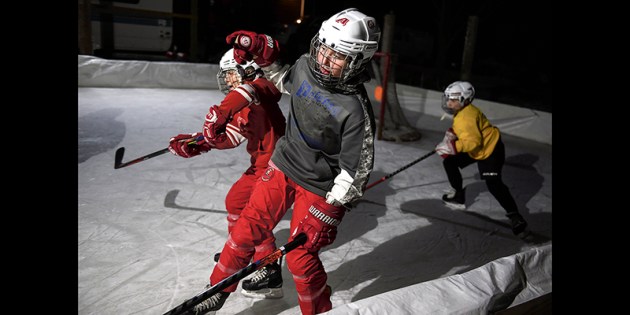 Cade Overocker takes a check during a game of backyard hockey at his home south of Austin Friday night. Eric Johnson/photodesk@austindailyherald.com 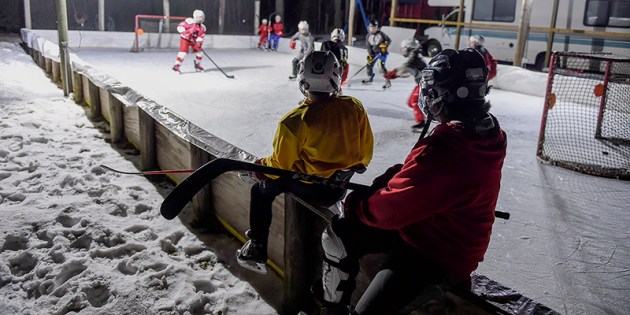 Isaac and Easton Granholm and Cooper and Weston Jacobson take in some Friday night hockey behind the Granholms’ house. Photos by Eric Johnson/photodesk@austindailyherald.com 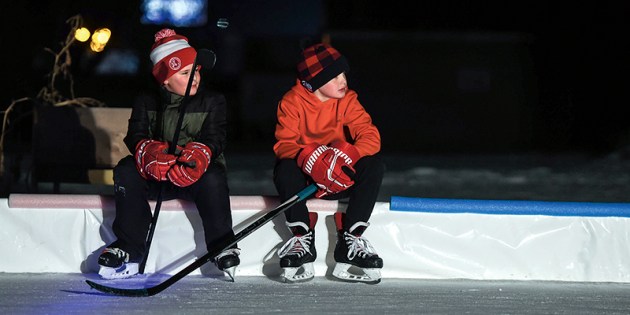 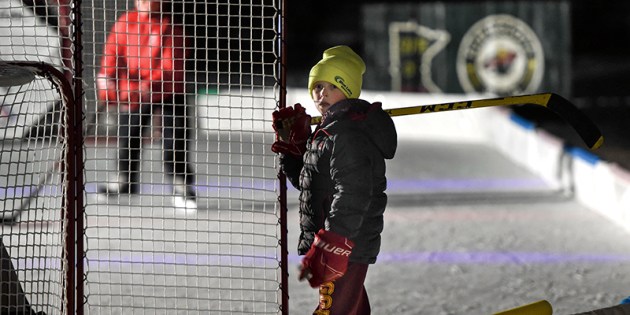 Easton Granholm takes a break during some outside puck shooting at the rink behind his home Friday night. Eric Johnson/photodesk@austindailyherald.com

Backyard hockey rinks have offered kids a place to play

When the temperature drops and the ground freezes, Friday night lights have taken on a whole new meeting in the Austin area.

Area kids can be seen gathering in backyards in dozens of homes across town as they strap on their skates and grab a stick. Before long, a game is breaking out.

Paul Overocker’s home may as well be hockey heaven for a youth player. He has a rink in his backyard, an indoor shooting area in his garage and he’s always made his rural rink available to friends of his three children and their hockey teammates. Overocker built the rink five years ago, but it’s popularity has increased vastly this year when COVID-19 shut down indoor rinks for over a month.

“Hockey was a big part of my life when I was a kid. My boys fell in love with hockey too and they had hockey sticks in their hand when they were crawling around,” Overocker said. “This gives the kids an opportunity to get more ice time. There are probably close to 15 of these outdoor rinks and arms are wide open for kids to come on out. We turn the lights on and go play. If you know anybody with the lights on in a backyard rink, they’re guaranteed to be all friends and all hockey players. If anybody is looking for a place to skate, they’re welcome.”

Overocker played on the 2001 Austin Packer hockey team that played in the state tournament and many of the players from that team now have kids that are playing youth hockey. Willie Granholm also played on that 2001 state tournament team and he built his own outdoor rink last winter as a Christmas present for his two sons.

His rink includes LED lighting to simulate the red line and the blue line and it’s lit just as well as any indoor arena.

“It’s one of the best investments I’ve done for my kids,” Granholm said. “They are a lot more active and when they want to skate, they can just come out. The day it starts getting cold, they want me to put it up.”

Granholm said that a lot of the guys from the 2001 team have put in time to boost the youth hockey program in town and he gave a special shoutout to Overocker, who often gets on the ice with the kids and plays with them.

“Paul puts in an extremely large amount of time into it. He is truly dedicated,” Granholm said. “We want to get our hockey program back on the map like we used to be. We want to compete with the top teams in the state. We want kids to be competitive and to enjoy wanting to and win. Life is competitive and if you’re not good at your job, someone can take your job. You can start to learn some of those life skills through the game of hockey.”

Overocker said there are currently about 160 players playing boys youth hockey in Austin and many of those players have played at his rink. The program has even received some donations that have made the sport more affordable for young players.

Landon Hill and Lucas Kiker were two of the several youth players on the ice at Overocker’s property last Friday. Teams were chosen at random as all of the hockey players threw their sticks on center ice and one player randomly grabbed sticks and threw them on opposite sides of the ice to see who was playing on what team.

The get-togethers sometimes include a Bruins player or two, but  it was all youth players on this night.

“I like it better out here because you can hit and you can breathe in the fresh air,” Hill said. “We don’t have to wear masks.”

Kiker was out at Overocker’s for the first time and he loved the view of the trees hovering over the frozen ice.

“I like playing with my friends out here,” he said. “It’s a nice way to get more time on the ice after practice.”

Overocker said he received a lot of help from friends and hockey parents when he put up his rink. He is an electrician, which helped him put up the lights and he said the rink hasn’t had a big impact on his electricity bill, but he has had to pay attention to how much water he uses.

“What we’ve got to watch out for how much water is in the well and we’ve run it dry a couple of times,” Overocker said. “We’ve just got to let it build back up and fire up on the next day. My wife doesn’t like it when we run out of water.”