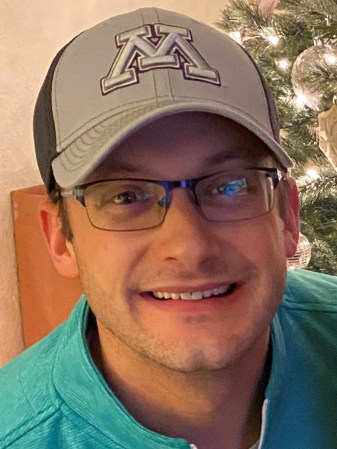 Michael Cerny Leathers, age 36 of Woodbury, Minnesota, formerly of Austin, passed away unexpectedly at his parents’ home on Sunday, January 24, 2021. Michael was born in Austin, to Donald and Marsha (Cerny) Leathers on March 21, 1984. He was baptized and confirmed at Our Savior’s Lutheran Church in Austin. Mike grew up in Austin and graduated from Austin High School in 2002. He then went on to attend the University of North Dakota, where he received a bachelor’s degree in geography. Michael resided in Woodbury, Minnesota, for the past several years where he worked for Comcast-Xfinity in the direct sales department. He had a successful career earning many awards, promotions, and recognitions. Michael always had a deep passion for sports. He was a three-sport athlete all four years at Austin High. His love of sports continued into his adult life and he enjoyed playing broomball and softball with colleagues and friends. Michael was an avid fan of all Minnesota sports teams especially the Minnesota Vikings and Minnesota Wild. In his adult life Michael enjoyed hunting deer, pheasant and turkey in southern Minnesota with family and friends. He enjoyed camping, fishing and traveling to National Parks and especially loved Yosemite, The Grand Tetons, Zion and the Alaskan Peninsula. Above all else, he cherished every little adventure he spent with his daughter Addison; four-wheeling trips in eastern Wisconsin, trips to pumpkin and sunflower patches, walks around the many lakes in Woodbury and attending Minnesota Twin games, just to name a few.

A private family service will be held at a later date. A public visitation will be held from 4:00-7:00 p.m. on Saturday, January 30, 2021 at Worlein Funeral Home in Austin. Masks, social distancing, and all COVID-19 protocol will be enforced. In lieu of flowers, memorials are preferred to the family. Worlein Funeral Home of Austin is assisting the family with arrangements. Condolences may be expressed to the family online at www.worlein.com.