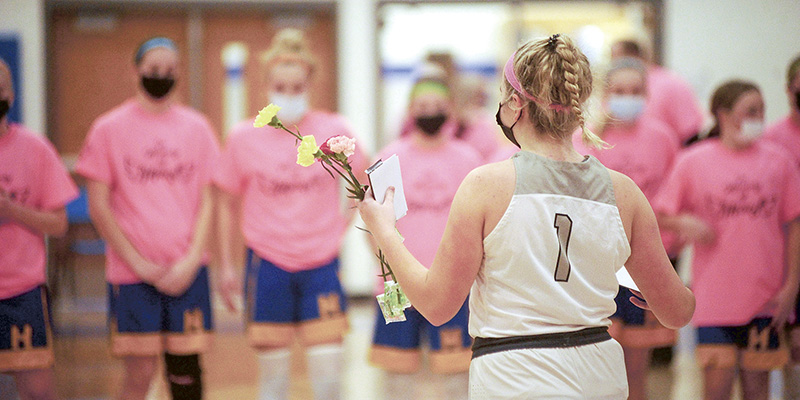 Blooming Prairie’s Maggie Bruns brings a gesture of good will towards the Hayfield girls basketball team before Tuesday’s game in Hayfield. Both teams honored the life of Macy Holtan, a Hayfield sophomore, who passed away in a car wreck on Jan. 20. Rocky Hulne/sports@austindailyherald.com

There may be 15 miles of highway separating Hayfield and Blooming Prairie, but when tragedy strikes either community — the two towns unite as one.

Such was the case this past week when Hayfield sophomore Macy Holtan passed away on Jan. 20 in a car crash on her way to school. Holtan’s memory was honored before the Blooming Prairie-Hayfield girls basketball game in Hayfield with each team wearing pink shirts as a tribute to Holtan.

The BP girls basketball team presented Hayfield players with a gesture of kindness before the game and paid their respects to Holtan’s family members who were in attendance as well. BP senior Bobbie Bruns said it was the least it could do after Hayfield offered a ton of support when Rachel and Emmerson Harberts passed away in a car wreck in the fall of 2018.

“I didn’t really know (Macy), but I knew of her. I 100 percent felt for them with some of the stuff we went through with the Harberts,” Bruns said. “It’s a heartbreaking experience and I know flowers and candy isn’t going to make up for it, but we did whatever we could to make them feel better in any way. It really goes to show in times like this how close we are and we always have each other’s back when times get tough.”

Blooming Prairie’s Maggie Bruns brings a gesture of good will towards the Hayfield girls basketball team before Tuesday’s game in Hayfield. Both teams honored the life of Macy Holtan, a Hayfield sophomore, who passed away in a car wreck on Jan. 20. Rocky Hulne/sports@austindailyherald.com

Hayfield sophomore Ava Carney said that Holtan was the ultimate teammate when she played basketball for the Vikings during her freshman season.

“She was very cheerful as a teammate and she was one of the better teammates we had,” Carney said. “She cheered for every point we scored. It was nice of BP to do that before the game.”

Hayfield head coach Kasey Krekling said last week was a tough one for his team. The squad had to take a break from practicing in the middle of the week to let the girls recover.

“We play a game that we find important and fun, but there are more important things and we took some time last week to talk about those things,” Krekling said.

Krekling said it helped to see BP lend a kind gesture in a time of need.

“Both communities support each other. We’ve had their back in the past and multiple Blooming Prairie staff members have called me in the past week to check on us,” he said. “Yeah we’re rivals on the court, but it’s a fun rivalry because we got along so well off the court.”