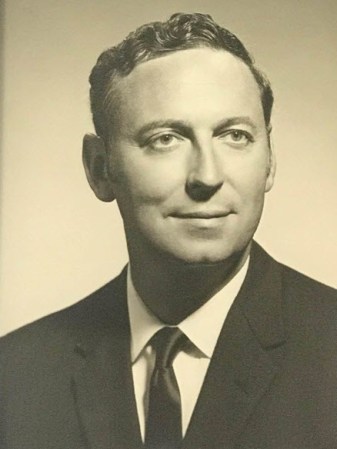 Walter was a professor of Organic Chemistry at Loyola University Chicago before joining Archer Daniels Midland (ADM), eventually becoming the director of research and development. Rather than move to Ohio when ADM sold off their chemical division, he moved on to Burlington Industries near Greensboro, NC, focusing on self-extinguishing fibers. (Coincidentally, his son Fred’s first assignment in 1979 as a new chemical engineer was the self-extinguishing fiber polymer manufacturing line at Monsanto.) Walter’s stay at Burlington lasted only one year, as he and two fellow former ADM employees founded Viking Chemical Company in Blooming Prairie, MN in 1969. He served as its Vice President and Technical Director and later President until his retirement in 1986.

Walter was world-renowned in peroxygen chemistry, especially the formation of peroxyacids and their use for the synthesis of epoxides. He had ten composition of matter and process patents in this field, leading to products such as IV bags, food wrap, synthetic sandalwood oil, functional fluid stabilizers, and many adhesives and coatings. Chances are you use something in your daily life that can be traced back to a patent that Walter held.

His greatest joys were listening to classical music, reading, gardening, playing baseball, softball, and tennis with his children, and later watching the Minnesota Twins and the Tampa Bay Rays. Walter owned two farms, including 203 acres on the Mississippi River outside of Bemidji, MN because he believed his children would benefit from being raised in a more rural setting. Improving his mathematics skills was a lifetime pursuit. He especially liked challenging himself by revisiting his algebra, trigonometry, and calculus textbooks, especially when his sons were pursuing their engineering degrees.

After retiring, he was able to immerse himself in his love for classical music, by returning to playing the violin and viola. He played with orchestras in Austin and Bemidji MN, and Sebring, FL. He acquired a valuable collection of stringed instruments. Three of note were a Stradivarius violin (The Lark), a Goffriller cello, and a Guarneri viola. Most of the instruments in his collection were loaned out to various young musicians, who considered playing these instruments critical to the development of their careers.

Space does not allow us to list all the unique aspects and qualities that made Walter the person we loved. As soon as we felt like we knew him and all his many facets he would come up with something new and remarkable based on his near photographic memory. Most conversations with him ended with us shaking our heads in wonderment. We are blessed to have been able to call him our father and that he shared his scientific achievements with the world.

A memorial service and celebration of life will be held in Minneapolis when it is safe to do so. His cremains will be interred at Resurrection Cemetery in Mendota Heights, MN. The family requests that donations be made to a local classical music organization or the classical music department of a college or university in Walter’s name.

Several caretakers provided skilled and loving care to Jackie and Walter over the years in both Minnesota and Florida. They include Rick, Dawn, Sonja, and Katelyn in Bemidji, and Jean, Marilyn, Judy, and Justo in Florida.

Finally, as Walter was clearly a science believer and unfortunately a victim of the insidious and deadly COVID-19 virus, his family implores everyone to honor Walter’s memory by masking up, distancing, and hand washing – the lives of others are depending on you!