Our opinion: Lyle seniors a model of resilience, Christmas spirit 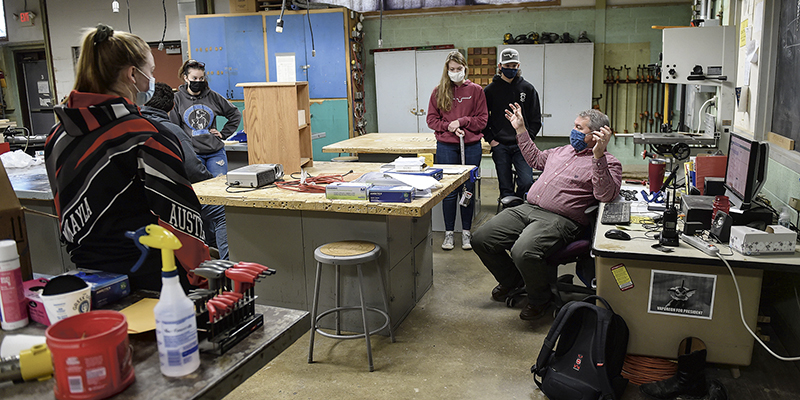 Lyle seniors come together with Jim Hansen to get to work on “The Polar Express.” With distance learning getting in the way, the class was forced to be inventive when it came to this year’s experience. Eric Johnson/photodesk@austindailyherald.com

The COVID-19 pandemic has forced us all to adapt in a variety of ways in order to cope with the burden put on us.

It’s never been easy and it won’t be easy going forward, at least  for the foreseeable future. All we can do is bear it and hope for a better future as vaccines begin spreading throughout the country and the world.

But while we are forced to deal with  this continuing headache, we can take some optimism from those positive stories surrounding us. We introduced you to one of those stories Wednesday.

Determined to ensure that a traditional Christmas celebration was observed in some kind of manner, the seniors from Lyle High School, directed by industrial tech teacher Jim Hansen, jumped in and simply adapted to tell “The Polar Express” in a new way.

The Polar Express Experience, as it had come to be called, involved several layers of interactive Christmas fun for elementary students in the Lyle Public Schools District. In the end it looked much different than the usual way “The Polar Express” was delivered at the school, but no less entertaining.

Since 2018, the seniors at Lyle High School have always played a part in delivering the story to the elementary students, but this year COVID-19 played an unwelcome part. It threatened to derail the young tradition, but what came forth is a testament of how much these students care about their community and the younger students.

The students came up with several ideas that were chained together to form the new and different experience that still was able to accomplished the same kind of fun of years past.

This was an example of how students rose to a challenge and accomplished the goals set by this challenge. Sometimes it’s easy to look at the younger generation and grumble that they are not doing the things the way we did them when we were that same age, disparage them as lazy and addicted to their cellphones. But examples like this show that anybody who has these judgments of age are underestimating what teens are capable of accomplishing.

We hope that the younger students benefited from this work and had fun with what was presented to them. It maybe wasn’t what they were used to, but nevertheless it was a taste of Christmas we all very much needed.

At the same time, we hope the seniors are proud of what they accomplished and understand the magnitude and the meaning of what they pulled off. We hope the community also realizes the gems they have in their own community.